Over 100 locals and visitors joined East Gippsland Shire Council Mayor Cr Mark Reeves - dressed in full pirate attire with a trusty parrot on his shoulder for the official opening today.

Marlo's newest treasure has sailed into Marlo Triangle Park. Hoist the Jolly Roger because this awesome playground will make sure the little hearties have a swashbuckling good time. The new park has undergone a $415,00 upgrade with all levels of government coming together to fund this investment. Council took the lead with a $300,000 contribution, and $115,00 came from the Local Economic Recovery Program, jointly funded by the federal and state governments. 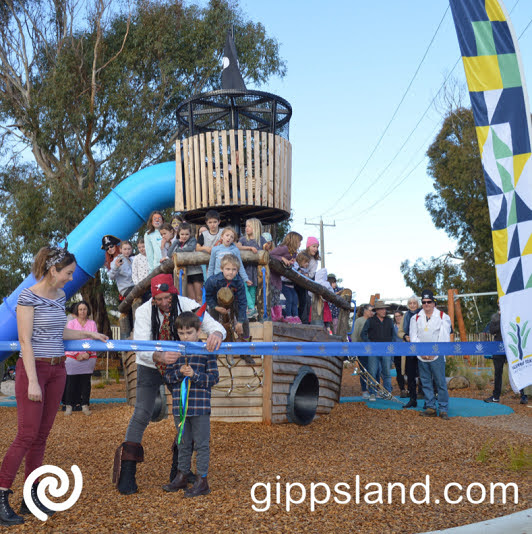 The key features of the upgrade include:

"It was time to upgrade the playground and I know the improved park will continue to be beloved by many. The ship here isn't just for pirates, it's for everyone! New playground equipment is already proving popular, while the landscaping complements the native characteristics of the town," Cr Reeves said.

As Marlo becomes increasingly busier it was important to include a new pedestrian crossing on Marlo Road, which provides a safer connection between the park, primary school and western residential area.

"The upgrades were identified as priorities by the Marlo community and the outcome is a result of positive collaboration and consultation. We incorporated feedback and ideas from the community including local primary school students, to deliver a park for the people, and we thank the students, Marlo Ratepayers and Residents' Association, community and our staff and contractors for their input."

"We aim for our towns to be 'sticky'. We want visitors to stop, stay, experience and spend. We know Marlo and surrounds have an abundance of attractions, but this upgrade helps make the town an even more attractive destination." Cr Reeves said.

Marlo Ratepayers and Residents' Association president, Shayne Boyd, said the idea for a refurbishment began with a motion from Simon Ruff at a meeting of the group in 2018.

"This led to the formation of a sub-committee to develop ideas and liaise with the council to bring about what we see today. This group included many young parents, who outlined their ideas for the sort of playground that would suit our small community. The result we see today reflects those ideas. Thank-you to the whole community who have got behind this project." Mrs Boyd said.
‍
The opening was scheduled for Saturday 9 July, however wet weather meant the event was postponed (in consultation with the community) until Sunday 10 July. ‍You can also watch the Marlo Triangle Park official opening at the council's Facebook page