East Gippsland Shire Council is excited to be welcoming the Barry Sheene Tribute Ride back to East Gippsland after a two-year hiatus.

Mayor Cr Mark Reeves said council was delighted to be welcoming the return of the popular event, and the economic and social benefits the ride brings to the region. "Council plays an active role in having the event start in Bairnsdale and also provides $2,000 in sponsorship," Cr Reeves said. 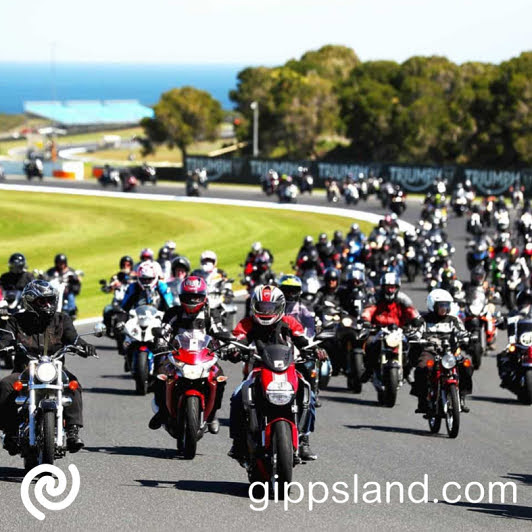 Mayor Cr Mark Reeves said, "The tribute ride has been an incredible event raising funds for charity over the past 18 years. It's also a fantastic way to showcase East Gippsland, as riders not only stop and spend in our towns but also enjoy some of the great touring roads and hospitality our region affords."

"As someone who enjoys getting out on the open road myself, I know our region's touring routes are a drawcard. It's a great sight to see all the motorcycle enthusiasts in East Gippsland in the lead up and following the MotoGP."

"The ride will see the return of many familiar faces who have participated in multiple tribute rides. We also hope to see many first-time tribute riders sign up for what is a great event. For those interested in seeing the spectacle of bikes, riders will be leaving Service Street, Bairnsdale, at 8am on Thursday, October 13, before leaving for Phillip Island and the Australian Motorcycle Grand Prix." Cr Reeves said.

The Australian Grand Prix Corporation in consultation with the Sheene family developed the concept of honouring Barry with a tribute ride from Bairnsdale to the Phillip Island Grand Prix Circuit almost two decades ago.

Sheene won the world championships in 1976 and 1977. After 1984, he retired from racing and moved to Australia where he worked as a property developer and motorsport commentator. He passed away from cancer in 2003.

Tickets go on sale soon, with all proceeds from the ride going to the official charity of the Animoca Brands Australian Motorcycle Grand Prix 2022. To participate in the ride, register online at the Phillip Island Point MotoGP website.