Federal Member for Gippsland Darren Chester is urging all levels of government to work together and fund the redevelopment of the Latrobe City Sports and Entertainment Stadium in Morwell.

Federal Member for Gippsland Darren Chester recently met with members of the local soccer community, to inspect the site, hear their concerns and discuss the work needed. "Right now this site needs a major facelift to restore it to its former glory and a real opportunity to establish a centre of excellence for soccer in eastern Victoria," Mr Chester said. 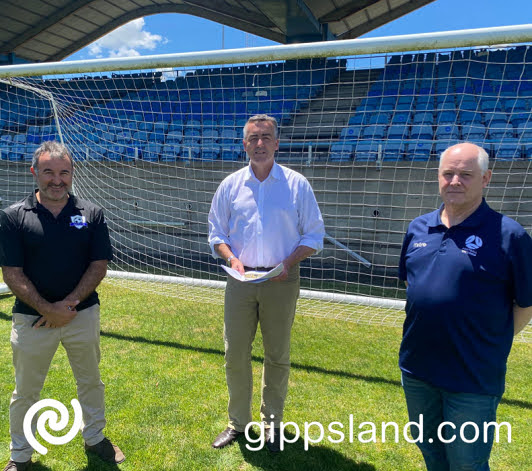 Mr Chester said, "From my inspection the facility needs a lot of work to be brought up to the standard expected of local sporting facilities, especially if the region wants to attract professional teams to the site."

"Not only is the venue deteriorating it is becoming increasingly more unsafe, with the user groups having to already restrict access in some areas due to safety concerns and amenities no longer being compliant."

"A large infrastructure project of this size requires all levels of government to work in partnership with the sporting community. I will continue to work with the local community and government counterparts to see this worthwhile and important project for our region funded." Mr Chester said.