East Gippsland community leaders have written to the Prime Minister to express disappointment with a bushfire recovery grants program they say is insulting to the local community. 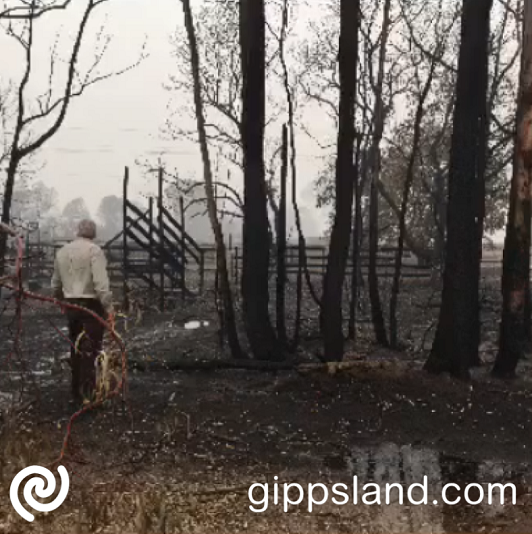 East Gippsland Shire Council Mayor Mendy Urie, State Member for Gippsland East Tim Bull, and Federal Member for Gippsland Darren Chester said the region would be short-changed unless the Prime Minister revised the allocation of just $4.5 million. Mr Chester said he was 'bitterly disappointed' by the funding allocation after meeting with Canberra bureaucrats and Ministerial staff to advise them of the unmet need in the region.

"I sat down with them in Canberra two months ago as they were working on the guidelines for this $280 million program and stressed the level of need in East Gippsland. It defies logic that they believe Wangaratta and Wodonga suffered anything like the same damage as East Gippsland Shire." Mr Chester said.

In their letter to the Prime Minister, the trio requested an urgent review of the funding allocation. "The 'funding envelope' proposed by the Commonwealth does not properly reflect the extent of damage in this municipality, compared to other municipalities in Victoria," the letter said.

"Under the model proposed by the Federal Government, the broader geographic region of north-east Victoria will receive $27 million (Alpine, Indigo, Mansfield, Towong, Wangaratta, Wodonga), while the broader Gippsland region will share in $9 million (East Gippsland, Wellington)."

The letter also said, "This allocation of funding does not reflect some key facts."

"As our region continues to recover from the bushfires, each government grant program has been heavily over-subscribed, and the unmet demand in East Gippsland remains considerable."

Cr Urie said the Council is working with the community to identify local priorities as recovery continues. "We certainly welcome the funding we have already received and we are working with communities across East Gippsland to support the recovery process but this allocation of funding is unacceptable to our municipality," Cr Urie said.

"We are in direct and regular contact with Community Recovery Committee (CRC) representatives across our shire. There is concern from fire-impacted communities and a fear of missing out, which is exacerbating impacts on communities. We request funding allocations be evidence-based, on both fire impact and need."

Increase the allocation in Gippsland

Mr Bull questioned how the Commonwealth Government could compare the damage sustained to major regional towns in north-east Victoria which didn't lose any properties, to towns like Mallacoota where more than a hundred homes were lost.

"The bureaucracy has clearly made a mistake and rather than plough on and make it worse, they should simply increase the allocation to East Gippsland, no-one is suggesting the fires didn't have an economic impact in areas outside the flame zone but it's illogical to give Wangaratta and Wodonga the same amount of Federal Government funding as East Gippsland Shire." Mr Bull said.