Federal member for Gippsland Darren Chester has requested an urgent meeting with the Minister for Agriculture Murray Watt to outline the economic consequences on towns like Lakes Entrance which are dependent on the industry. "The Federal Budget announcement of $24 million over three years to transition commercial fishers out of the Commonwealth South East Trawl Fishery has added to the urgency of the need to support the onshore industry," Mr Chester said. 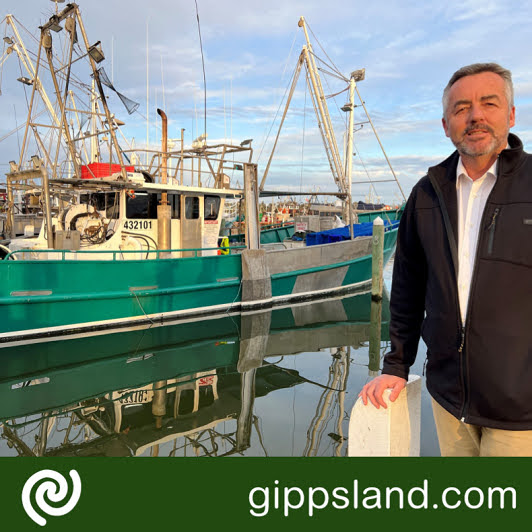 Mr Chester said, "The failure to simultaneously announce an onshore structural adjustment package in Lakes Entrance, despite the anticipated economic impact of the proposed licence buyback, is of deep concern to locals."

"The Australian Fisheries Management Authority (AFMA) has undertaken port visits, starting in Lakes Entrance, and it has created considerable anxiety and uncertainty."

"The situation is that jackass morwong and several other stocks have either not recovered from historical overfishing, or have declined further with low catches. None are commercially important or targeted species but come along with valuable and targeted flatheads." Mr Chester said.

Mr Chester added, "There is some frustration among fishers that CSIRO stock assessments changed very quickly in the case of Morwong decreasing the Total Allowable Catch by 95 percent in one action between seasons. All of this uncertainty is creating social and economic risks in local communities which I believe warrants a 'pause' and thorough analysis by the incoming government."

"At the moment, fishers are unsure what compensation will be available to them; whether they have a sustainable future in the industry; whether dormant licence holders will be targeted first; and if they accept a package, will they be compensated for boats and equipment."

Mr Chester highlighted the additional impacts on shore-based businesses related to the commercial fishing industry. "The onshore facilities such as the Lakes Entrance Fishermen's Co-op, cannot plan with any certainty and would be undermined if tonnage through the processing facility was dramatically reduced by AFMA's action," he said.

Mr Chester also said, "I strongly believe there is a critical need for a thorough analysis and better understanding of the social, economic, environmental and cultural implications of AFMA's proposed actions prior to the proposed fishing ground closures."

"The commercial fishing industry underpins the economy of Lakes Entrance which has been hit by the combined impacts of drought, bushfires and the coronavirus."

"A decision to impose further restrictions on the fishing industry without a full appreciation of the wider implications would be devastating for the local economy." Mr Chester concluded.