Federal Member for Gippsland Darren Chester says the Latrobe Valley's role as a critical energy generator will be boosted by the decision to include the region as one of seven hydrogen hubs in Australia. The Clean Hydrogen Industrial Hubs program will enable the rollout of hydrogen hubs across seven priority regional sites, including the Latrobe Valley. 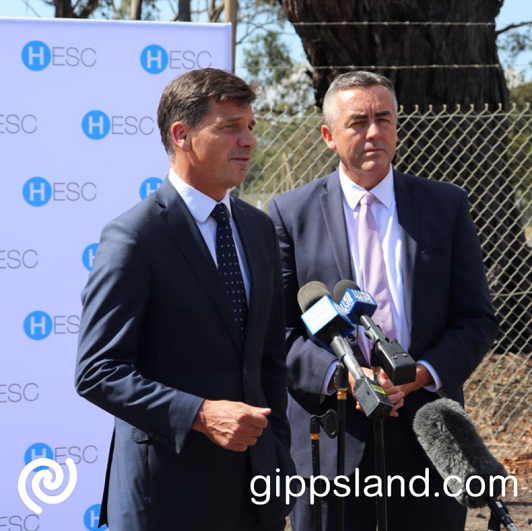 Federal Member for Gippsland Darren Chester, pictured with Minister for Energy and Emissions Reduction Angus Taylor, said the Latrobe Valley's role as a critical energy generator will be boosted by the decision to include the region as one of seven hydrogen hubs in Australia

Mr Chester said, "Hydrogen is a clean fuel of the future, and Australia will commercialise this technology by co-locating hydrogen production and industrial uses, and building on the infrastructure and workforces of regional areas, the Latrobe Valley has a rich heritage as an energy powerhouse but we can also look forward to a great future by investing in technology for projects like hydrogen production."

The $464 million grant program provides up to $3 million grants for project consortia to initially progress feasibility and design work, and up to $70 million towards the roll-out of projects. Seven prospective locations across Australia have been identified and include: Bell Bay (TAS), Darwin (NT), Eyre Peninsula (SA), Gladstone (QLD), Latrobe Valley (VIC), Hunter Valley (NSW), and Pilbara (WA).

Prime Minister Scott Morrison said these hydrogen hubs would create jobs across Australia and fast-track Australia's push to be a global leader in the new energy economy. "Our plan to invest and develop low emissions industries will mean more jobs for Australian workers, particularly in our regions, cheaper energy for businesses and lower emissions," the Prime Minister said.

"We are accelerating the development of our Australian hydrogen industry and it is our ambition to produce the cheapest clean hydrogen in the world, transforming our transport, energy, resources and manufacturing sectors. This is good for jobs, good for our environment and contributes to our global effort to reduce emissions through technology not taxes." The prime minister also said.

The Clean Hydrogen Industrial Hub Grants program will build on the work being done by the Special Adviser on Low Emissions Technology, Dr Alan Finkel, to broker international partnerships and initiatives that will accelerate the deployment of hydrogen and other priority low emissions technologies.

It comes after the Latrobe Valley officially launched the Hydrogen Energy Supply Chain (HESC) project at Loy Yang which uses gasified brown coal. "The HESC project is one example of the exciting opportunities for the Latrobe Valley as a hydrogen hub. It created 150 jobs in construction and 10 ongoing roles and there is potential for more economic activity in the future," Mr Chester said.