Local sporting clubs and community groups welcome the official completion of lighting upgrades at the Longwarry and Thorpdale recreation reserves with a ceremonial 'flick of the switch' celebration held at the Longwarry facility on Friday.

Mayor of Baw Baw Shire Cr Michael Leaney, together with state Member for Eastern Victoria, Harriet Shing MP officially turned on new oval lighting with members of the Longwarry Football and Netball Club ahead of the Under 10's football game against Longwarry and Neerim District. 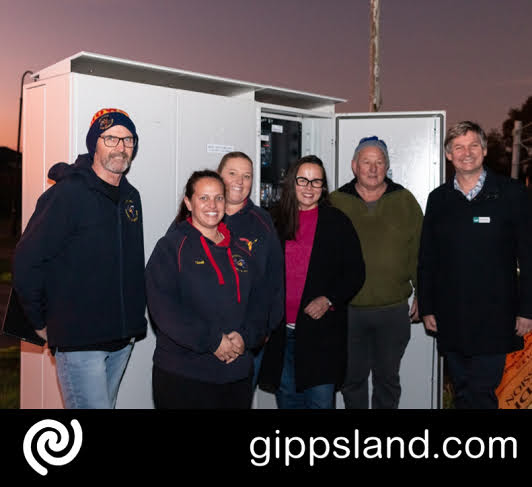 A recent audit into both facilities found the average lux levels were below the preferred guidelines for training and competing on the fields. With the support of the state government, the council has completed a range of upgrades.

Former President and current joint Treasurer of the Longwarry Football Club, Steven Tuit spoke of what this project meant for the club. "These lights will benefit nine football teams ranging from Auskick to Seniors including our inaugural girls' team, which I have no doubt will lead into a senior female team in no time. The lights will also benefit our cricket club that has 7 teams, including a female only team and enable them to train longer and play some games under lights".

Annie Heyden of the Longwarry Junior Football Club also spoke of the upgrades saying "It's a promising future for our club now being able to host league games at night is something that the whole club and community will benefit from."

The $405,543 Longwarry and Thorpdale Recreation Reserves lighting upgrades project was made possible by a $250,000 grant from the Victorian government's Sport and Recreation Victoria's Community Facilities Fund and a $155,000 contribution by Council.

Mayor Cr Michael Leaney said, "We're thrilled to complete these upgrades at both facilities that will now ensure the local sporting clubs and spectators can enjoy games with maximum visibility. These works follow other recent lighting upgrades at the Darnum and Hallora Recreation Reserves, and underscore council's commitment to supporting participation and involvement in sports at a grassroots level."