The key aim of the program, made possible by a $10,000 grant from the Latrobe Valley Authority, is to help event organisers and businesses understand the positive contribution events provide to the local economy. Bass Coast Shire Mayor, Cr Michael Whelan said that the voucher program has been used to support three events across the region so far. 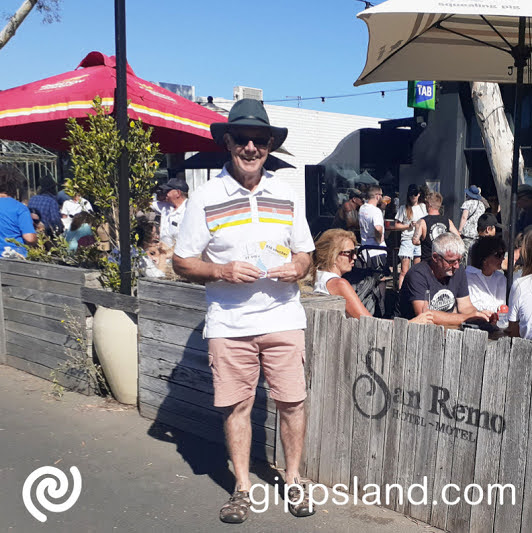 Mayor Cr Michael Whelan with some of the vouchers during the San Remo Channel Challenge, held earlier this year

Cr Whelan said that as part of the program, council provided $5 or $10 vouchers to attendees at the:

"These vouchers could be used at businesses in the local area during the event and for up to two weeks following. We worked directly with 25 businesses in Cape Woolamai, Newhaven, San Remo and Inverloch for this program and have received excellent feedback." Cr Whelan said.

"Businesses owners found that the customers who used the vouchers turned into repeat customers for the duration of the event. In total, over $4000 worth of vouchers were redeemed, supporting our local businesses." Cr Whelan said.

CEO of Surfing Victoria Adam Robertson said that the voucher program was a great success. He said it worked incredibly well and was a "win win" for the Phillip Island Pro and the local community.

"Competing athletes received discounted food and drink whilst local cafes and restaurants saw more customers over the event period. The feedback we received from competing surfers and local businesses was that it not only helped inject money into the local economy, but it also helped to increase the interest and community involvement in the event." Mr Robertson said.

Participating businesses were also delighted with how well the program worked. Vanessa Ware from Burnt Toast in Cape Woolamai said that the vouchers were easy and straightforward to redeem. "I found the program to be effective and Burnt Toast would be happy to participate in similar programs in the future," Vanessa said.

In San Remo, there were 35 vouchers redeemed at the Fisherman's Co-Op. "It was a great idea judging by the number of vouchers we received, people took advantage of the offer," A spokesperson for the business said.

Cr Whelan said that the remaining funding will be used to run similar programs in coming months. "Due to the overwhelming success of this project, we will be working with local event organisers to support more voucher programs before the end of the year," Cr Whelan concluded.