Three-month campaign to Vote for Victoria's Worst Road asks motorists to submit first-hand condition reports via an online portal to list the most dangerous hazards risking lives on our roads every single day.

Following a city-based Labor MP saying complaints about the country roads network were an "imagined fantasy", a new road safety campaign has been launched to find the worst roads in the state. East Gippsland Nationals MP, Tim Bull, said he was expecting country roads right around the State to figure prominently after roads maintenance funding was cut by a whopping 23% in last year's State Budget. 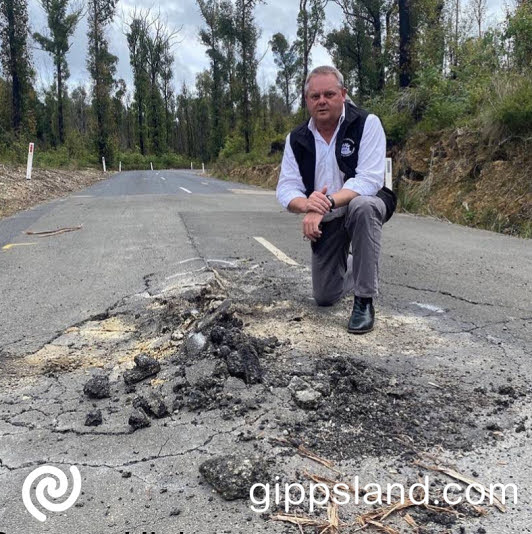 The Princes and Monaro highways could also take the cake, as both are notorious for having failing road surfaces, deep potholes and crumbling edges. "All too often I hear from locals who are frustrated with just how rough and unsafe our neglected roads have become," Mr Bull said.

"Only two weekends ago, one deep pothole on the Princes Highway near Stratford damaged six cars in one afternoon. This is absolutely unacceptable. I will continue to fight for better maintenance funding to repair these major transport and tourist networks in my electorate that will improve confidence for road users." Mr Bull said.

Mr Bull also said, "This new road safety campaign is a crucial opportunity to highlight the worst of the neglect in our local area to make sure East Gippsland is a priority when funds are finally delivered for road upgrades."

"State Labor's been in government for 19 of the past 23 years, but while it's found $24 billion to fix budget blowouts on its poorly managed major projects, it's spent less fixing and maintaining our roads." Mr Bull continued. The state Labor government carved nearly $200 million from road asset maintenance in last year's State Budget alone, a 25 per cent cut down to $616 million.

Since 2014, Daniel Andrews has also axed the Country Roads and Bridges maintenance program and abolished a key joint parliamentary committee that had overseen road safety since 1967. Shadow Minister for Roads Steph Ryan urged drivers to have their say to expose the problems. "Properly maintained roads are safer roads," Mr Bull said.

"Fixing the maintenance backlog won't be an easy task - as the Victorian Auditor-General says, poorly-maintained roads cost more to repair, cost motorists more in fuel and in vehicle repairs, on top of the safety risk. Only a change in government in November will stop the waste and mismanagement, with a better managed budget delivering savings that can contribute to reversing Labor's cuts." Mr Bull concluded.

For submissions for Victoria's worst road, visit the online portal at Vicsworstroad.vote.