The first sod has been turned at Bellbird Park to mark the commencement of works on a vibrant new multi-use pavilion and community events facility. 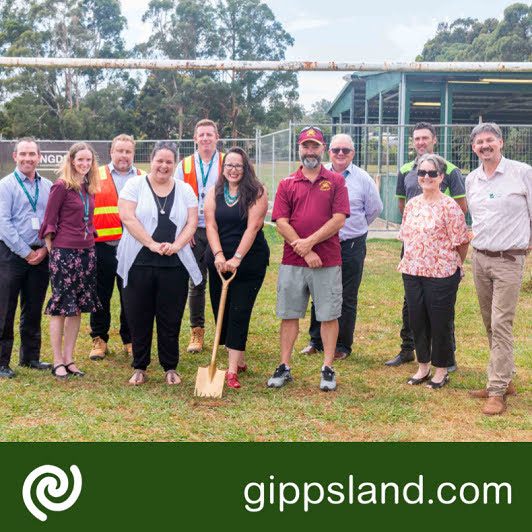 Upgrades to be done

Stage one of the project is due to begin shortly with the construction of a new 186 space car park. Weather permitting, it is expected that this stage will be completed by May 2022.

Once fully completed, the project will deliver a female-friendly multi-use community facility, including:

A Project Reference Group (PRG) including representatives from local sporting clubs and community members has collaborated with Council to design the project plans.

PRG member Jason Beer, President of the Drouin Dragons Soccer Club has been involved with the project since 2019 and was excited to see action starting on the project. "This upgrade will be a game changer for the clubs of Bellbird Park, not only will it create more opportunities for participation, but it will allow us to host more competitions at the facility. It has been awesome to work with Baw Baw Shire on this project since day one".

The new pavilion will be home for local clubs including West Gippsland Hockey Association, the Drouin Dragons Soccer Club and Drouin Cricket Club. The facility will also provide a community events space and contribute to the Drouin Community Hub implementation plans.

Stephanie Gourley from the West Gippsland Hockey Association has also played a key role in shaping the designs and project plans as part of the PRG. "We are thrilled to see this project come to life with the construction gates up and works starting to begin" she said.

"This upgrade will mean so much to the local kids and sporting groups who utilise this facility day in and day out". Ms Gourley said. Council is contributing $2,170,000 to the project, with the Victorian Government contributing $2,000,000 via its Growing Suburbs Fund.

Getting the community involved

As part of the wider project, council will also soon undertake community consultation regarding the future of the Rumble Pavilion. The structure had been planned for removal, however, following submissions from the community.

Its potential future use will be reassessed. The consultation is set to open on Monday 31 January for 3 weeks. More information will be provided in the coming days on how to get involved.

Getting the project done

Mayor Cr Michael Leaney said, "I would like to acknowledge and thank the hard work of the volunteer Project Reference Group made up of volunteers and community members who have worked closely with council officers to get the project to this point."

"We welcome the significant support from the state government to help get this project up and running and are thrilled to begin work on this milestone project at Bellbird Park." Cr Leaney said.

To stay up to date with the project's progress please visit Bellbird Park East Pavilion.