The picturesque drive along Mt Baw Baw Tourist Road has reached colourful new heights with a bright and beautiful, eye-catching mural in Tanjil Bren. Public toilets aren't your usual 'must see' but that recently changed in Tanjil Bren thanks to council's Public Art Fund, and a contribution of $20,000 towards the commissioning of the mural project- which has transformed the public toilet facilities from drab to fab. 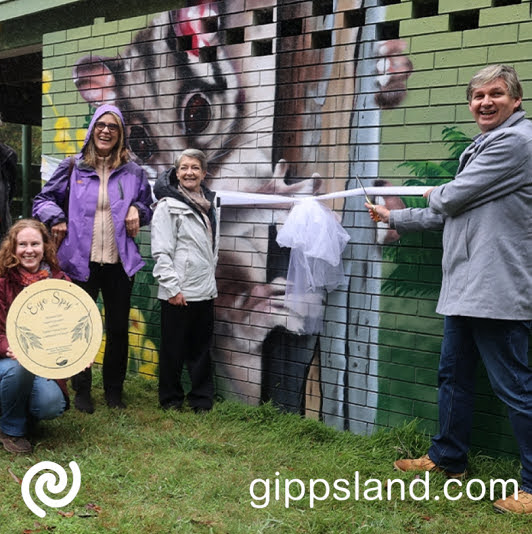 In October 2021, council put out a call to local residents, community groups and artists to express their interest in commissioning a public art mural. Those wishing to submit an application were asked to include a concept sketch of the artwork, the proposed location and artist, the project budget - and an explanation of how the mural would tie into the location and its surroundings.

Over a dozen applications ranging from small communities, through to larger towns were submitted to council. Following an assessment against the selection criteria, Baw Baw Shire Council's Arts and Cultural Advisory Committee narrowed the submissions down to two. These two finalists were then invited to present in person to the committee, where the successful submission was chosen.

The Tanjil Bren Water Co-operative was successfully awarded funding for their proposal with the toilet block facilities providing a large, unobstructed canvas upon the entryway to both the Tanjil Bren Village and the gateway to Mt Baw Baw.

Of the project, co-op member, Rachel Goldsworthy said, "There's been talk in the community for over a decade about having an art mural within the Tanjil Bren area. We are a community that loves art, and we wanted every cent of the grant money to go into the mural to make it as good as possible."

"To achieve the goal of getting a mural done, and to this quality, has without a doubt been made entirely possible thanks to the council's Public Art Fund. The other thing that is really important is the utter trust that Baw Baw Shire Council put in us throughout it all. We'd never done something like this before so that is a pretty enormous bit of trust that's come in to make sure that the funding was put to the best use". Ms Goldsworthy said. 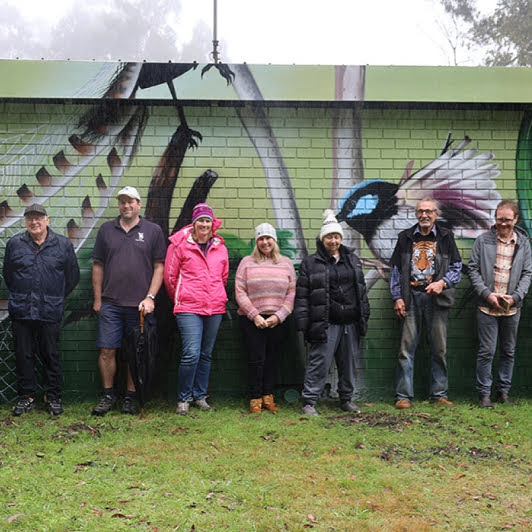 Artist- Daniel Wenn from 90 Degrees Art, provided three carefully considered concept ideas to the Tanjil Bren locals, who were then given the opportunity to vote for the preferred concept through the Tanjil Bren Locals Facebook Group.

The concept behind the chosen design was to showcase the flora and fauna of Tanjil Bren through a bright and colourful mural. Set against a lush background of trees, ferns, branches and leaves, the mural titled 'Eye-Spy' features a beautiful Boobook Owl, a male Fairywren, a Lyrebird, an Eastern Yellow Robin and a Leadbeater's Possum - all of which are protected local species.

The mural was completed on Friday 4th March 2022, attracting much attention from locals and those passing through, stopping to take photos and to play eye-spy. Alongside the mural, council has repainted the wooden facia on the toilet entry, installed signage listing the flora and fauna featured on the mural, and a new toilet sign which is positioned in the carpark.

Mayor Cr Michael Leaney said, "The community of Tanjil Bren was cut off from the Mt Baw Baw Tourist Road for 5 months in 2021 as a result of significant storm damage, so this is a great boost for an embattled community looking for recovery. This project was a wonderful initiative to transform an otherwise ordinary looking 1980's brown brick toilet block.

"The community has done such a great job steering this project and the artist, Dan from 90 Degrees Art, has done an amazing job in bringing the idea to life with bursts of colour and beauty. It is truly eye-catching and a fantastic gateway into Tanjil Bren and Mt Baw Baw." Cr Leaney concluded.