Baw Baw Shire Council has gratefully accepted a carved wooden dingo sculpture generously donated by the Kennedy family, farmers and residents of the Shire for more than 100 years.

During a Civic Ceremony at last night's Council Meeting, Mr Brian Kennedy presented the members of Council with the commissioned sculpture 'Warrigal' carved by local artist John Brady. In the language of the traditional owners of the land, the word warrigal is associated both with wild and wild dog. The sculpture 'Warrigal' depicts a dingo, which has historically been associated as representing Warragul. 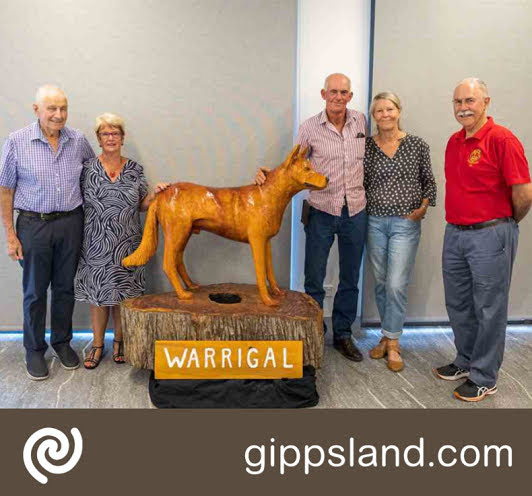 Mayor of Baw Baw Shire Cr Michael Leaney joined Mr Kennedy in unveiling the artwork to members of Council, Mr Garry Blackwood MP, the Kennedy family, the artist and other invited attendees. The artwork itself was commissioned and funded by Mr Kennedy utilising local timber. He also received donations from the Warragul Lions Club and others to create the one-of-a-kind artwork intended for public display within the Shire.

"I am passionate about local history. Going back to the start of the Kennedy family, my great grandfather moved to the Warragul Shire in 1902 at Seaview and the Kennedy family has farmed in our district for 100 years. As long as I can remember, the dingo was the emblem of Warragul Shire and was stamped on official Shire papers but was lost with the shire amalgamation around 1994." Mr Kennedy said the inspiration for the sculpture.

Over time there have been several different spellings to the town name, however, "Warragul" is the accepted spelling as per the town's original inhabitants. Prior to accepting the sculpture, council consulted with Kurnai Elder Aunty Cheryl Drayton and the Gunaikurnai Land and Waters Aboriginal Corporation (GLaWAC) who have expressed support towards Council accepting the artwork for public display. 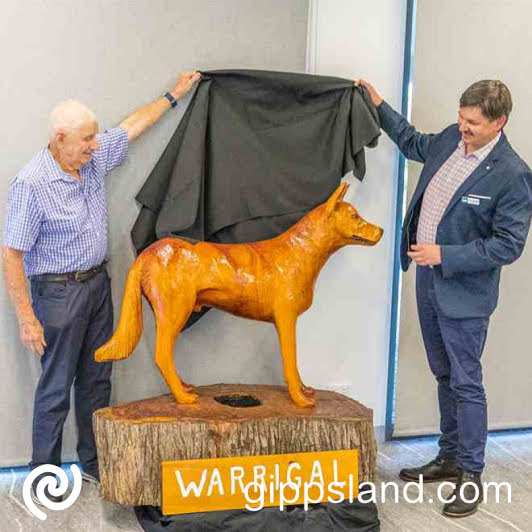 Acknowledgement for the support

During his speech, Mr Kennedy acknowledged the parties involved in bringing the sculpture to life. "There are a lot of people I must thank for this venture," said Mr Kennedy. "Firstly, to Michael Daniels for supplying the logs and encouraging the idea. To Cheryl Drayton, thank you as an indigenous elder for supporting the aboriginal name, 'Warrigal'.

Thanks to Gary Blackwood for his help and support. To Karen Whitaker-Taylor from the West Gippsland Arts Centre for her help over the last 12 months with many phone calls and emails. A big thanks to the Warragul Lions Club for their donation of $500, especially Peter Hammond who worked with me while I helped the Lions Hay Run for the bushfires. And my biggest thanks to John Brady for a job well done and for his interest.

Finally, thanks to Baw Baw Shire Council for accepting this gift to the people of Warragul and surrounding district. May we say our emblem has returned to Warragul." The future site of installation will be determined by Baw Baw Shire's Arts and Cultural Advisory Committee in consultation with Mr Kennedy in the coming months. 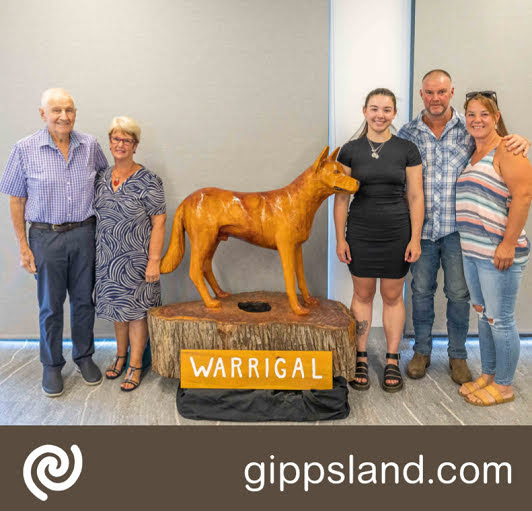 Mayor Cr Michael Leaney said, "On behalf of Council, I thank Mr Brian Kennedy and family for their generous gift to the community. A lot of care and consideration has gone to the creation of this sculpture."

"Warrigal represents the area's heritage and spirit as well as reminding us of the origin of the town's name. We look forward to determining where best to showcase this sculpture for the benefit of our residents and visitors to appreciate now and into the future." Cr Michael Leaney said.

To watch the Civic ceremony please follow the link to council's agendas and minutes.