Re-elected councillor swearing-in and induction to join and be a part of his old team.

Keith Cook has been returned as a West Ward Councillor in a Victorian Electoral Commission Declaration of Polls this morning following the recent resignation of Cr Ben Lucas. Councillor elect Cook's swearing-in and induction will take place early next week and he will attend the next Councillor Briefing on Wednesday 7 July. 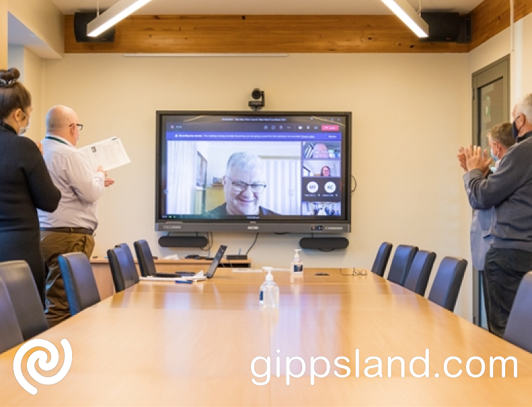 Councillor elect Cook is congratulated following the Declaration of Polls

Councillor elect Cook was a valued member of the previous Council and is well respected within the West Ward, which includes Drouin, Drouin South, Drouin West, Longwarry, Jindivick and surrounding districts.

He is also well-known for his service to the Drouin community as a long-term volunteer and more recently as the Captain of Hallora and District CFA, and a member of the Committee for Drouin, Rokeby and Crossover Friends Group, Warragul and District Historical Society and Drouin Rotary Club. During his previous term on Council from 2016 to 2020, Councillor elect Cook also served as Chair of the West Gippsland Libraries board.

Mayor Cr Danny Goss said, "I would like to congratulate Councillor elect Cook on his re-election to Council and thank him for his continued commitment to Baw Baw Shire. He brings a wealth of local knowledge to the table and is a dedicated volunteer in a range of community groups. With a full Council now restored, we will be focused on working with our community and the organisation to achieve the aspirations of our new Council Plan over the next three and a half years."

Part of the old team

Councillor elect Keith Cook said, "I'm really excited to to join the old team - with some new members too - and be a part of it. You've been doing a great job and I look forward to working together for next four years."