Reminding pet owners to clean up their pets waste, failure to do so will be fined.

As the warmer spring weather entices more people out to walk their pets, Wellington Shire Council is reminding dog owners not to leave it to others to clean up after their pooches. Council's Local Law requires dog walkers to carry a device such as a bag, which they can use to pick up what their pets leave behind. Failure to remove excrement can also attract a fine. 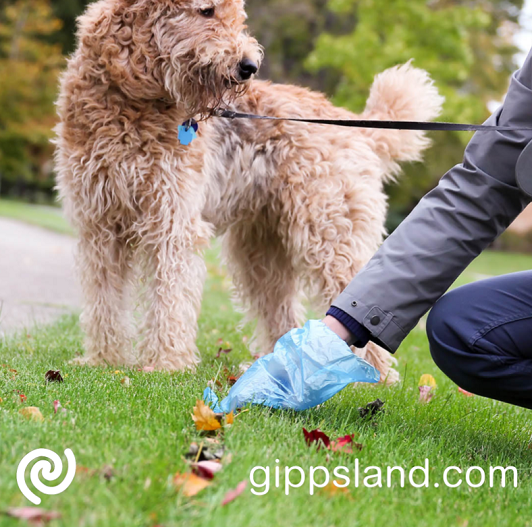 Picking up your pet's poop when you bring it out in public helps in keeping the community safe from harmful microorganisms, and to also keep you from getting a fine

Being a responsible pet owner

Apart from the local law, the Council is also calling on people to consider their responsibilities as pet owners. "We can be proud of living in a rural area where we can get outside and enjoy our beautiful public spaces with our beloved pets," Wellington Shire Council Mayor Garry Stephens said.

"But there's nothing beautiful about stepping in poop that has not been picked up by a pet owner. We're simply asking people to be responsible owners and carry around something to clean up anything left behind by their dogs."

Keeping the community safe from harm

Dog faeces may contain harmful organisms such as Giardia, Parvovirus, Salmonella, and E. coli that can be transmitted to humans and other animals by ingesting contaminated water. It degrades slowly and accumulates faster than it takes to break down.

Rather than act as a fertiliser, it impedes landscaping efforts by encouraging other dogs to mark that same spot, as well as contributing to the nitrogen burn problem on grass. While Council does provide bags for cleaning up dog excrement in high use areas, it is done so as a courtesy, and a lack of bags in dispensers is not an excuse to leave dog poop behind.