Federal Member for Gippsland Darren Chester will be asking Lakes Entrance residents "what's next for our town" in a survey to be distributed ahead of the election on May 21.

Mr Chester said the town was halfway through a major transformation and it was timely to ask the community what funding priorities they would like pursued in the next term of Federal Parliament. "Over the past five years, I've been able to work in partnership with other levels of government to help deliver more than $20 million worth of projects in Lakes Entrance including the Esplanade redevelopment, new lookout at Kalimna, football-netball club change rooms, and the Bullock Island bridge." 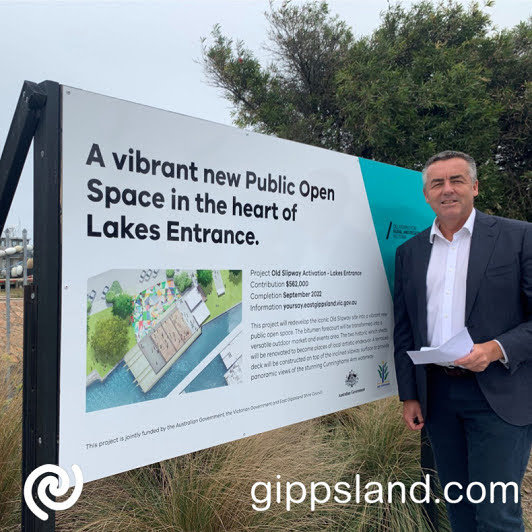 What's next for Lakes Entrance? Federal MP Darren Chester is asking locals for their input as he inspects the Old Slipway site which is being redeveloped with government funds

Mr Chester said, "We have also secured about $20 million in additional federal government funding for Marine Parade improvements, the Old Slipway redevelopment, a foreshore playground, Jemmy's Point reserve, Eastern Beach Road safety treatment, and Krauatungalung boardwalk. "Our town is going to look very different in two years as these projects are all delivered and the obvious question is 'what's next'?"

"I have some ideas of my own about the need for a new indoor sporting centre and improved emergency service facilities but I'm keen to hear from local residents. I meet regularly with East Gippsland Shire Council and Lakes Entrance Action and Development Association to discuss their priorities but I thought it was important to ask the community for some direct feedback." Mr Chester said.

Mr Chester said he was extremely optimistic about the future of Lakes Entrance as the government-funded projects help to stimulate private sector investment. "I'm confident that we will start to see more of the empty shops filling up and more people choosing to live in our beautiful part of the world as we continue to improve services and local facilities," he said.

"Work on all these projects will help to create local jobs, and boost our economy, providing more opportunities for young people to remain in our region." Mr Chester concluded.