Over the past four years, Ladder program participants have achieved outstanding outcomes, re-engaged in education, employment, and training.

More than 4 in 5 young people have re-engaged in education, employment, and training, following participation in the Ladder Step Up Latrobe Valley program, an evaluation of the program over a four-year period has revealed.This coincides with the Victorian government announcement that the program will receive an additional 12-month funding to continue supporting more young people in the local community. 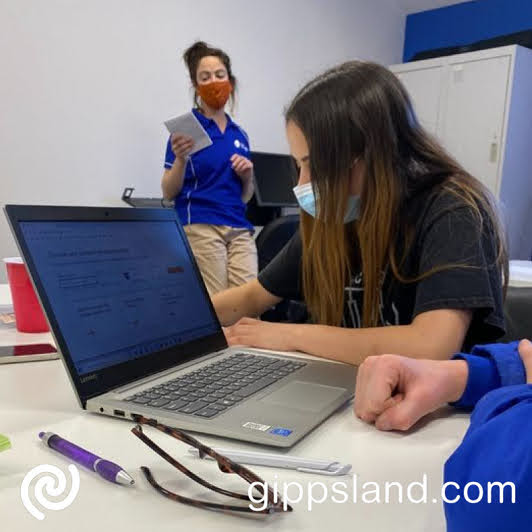 The Ladder Step Up Latrobe Valley Impact Report 2022 was launched at a community event in Morwell today and found that since 2018, more than 178 young people across eighteen programs have been successfully supported to identify, engage in and sustain education, training and employment.

Sarah believes the program helped her with her confidence and self-worth and has made her the person she is today. "[It] gave me confidence. I was very shy and couldn't speak for myself when I joined the program," she said.

Simone, another recent program graduate entered the program as a shy, reserved young person looking to return to school and find employment. Through her hard work, commitment, and support from the Ladder team, Simone returned to school and is currently participating in a traineeship with A Kinder Cup, Morwell Neighbourhood House's social enterprise cafe.

"I'm also thankful to the Ladder Program for being such a positive thing in my life, and for continuing to provide me with opportunities even after I finished the program," Simone said. The Ladder Step Up program received renewed funding as part of a $7.5 million package in the Victorian Budget 2022/23, that will allow the program to continue providing education, employment, and training support for young people in the Latrobe Valley.

Member for Eastern Victoria Harriet Shing said, "Over the last four years, I have seen the real and incredibly positive impact the program has had on young people across the Valley. It's quite literally changing lives."

"Every single graduate has not only gained confidence and skills, but has also become a role model for others to do the same - I can't wait to see our graduates continue to thrive, and for more participants to make their mark into the future." Ms Shing said.

Ladder CEO Stephanie De Campo said, "We would like to thank the Victorian government and the Latrobe Valley Authority for its continued and meaningful support. It's clear the program is achieving what it set out to do and the organisation is immensely proud of the young people's achievements."

"The success of the program can largely be attributed to a whole community approach. We feel privileged to have worked alongside over 130 organisations and 31 referral partners who have supported the program and enabled us to provide engaging and holistic support to program participants."

"I would like to acknowledge the young people whose achievements have been nothing short of inspiring. Despite facing complex and ongoing challenges during the COVID-19 pandemic, the young people showed unbelievable strength, resilience and optimism during this time." Ms De Campo said.