Federal Member for Gippsland Darren Chester said the Government was pleased to support the Macalister Irrigation District (MID) project that would improve the resilience and reliability of water infrastructure, ensuring a stronger future for water security across the region. 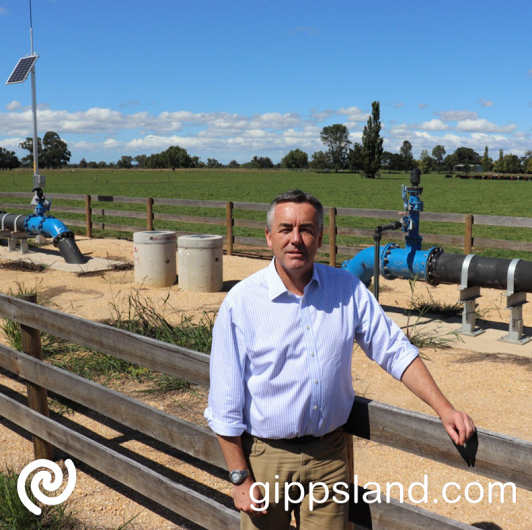 Federal Member for Gippsland Darren Chester has welcomed a further $2.5 million in Federal Government funding for the Macalister Resilience and Critical Infrastructure project

Mr Chester said, "The MID project is all about supporting hundreds of local jobs, protecting the environment, and building on a world class agricultural region to make it sustainable for the future. We've already seen irrigators benefit from the modernisation project, which has allowed them to make significant on-farm investment and improve their irrigation practices"

"The project will provide money to upgrade the two main sluice pipes to be replaced by larger diameter pipes making it more efficient for irrigators. This will build on previous investment across the MID, which includes the replacement of open channel systems with new pipelines, and modernisation works including the upgrade and automation of outlets."

Mr Chester said the project would increase water availability and security through the generation of around 10.3GL of water savings and would improve water delivery efficiency to support increased agricultural output.

Construction is expected to be completed in late 2024. By 2024 all phases of the modernisation project are due to be finished. The project is among 40 water infrastructure projects to share in $108 million in Federal funding under the National Water Grid Connections funding pathway. For further information, visit the National Water Grid.