Local families had the opportunity to take part in a Welcome to Boorai Country Ceremony this week.

The Boorai Country Ceremony was an important part of the Latrobe First 1000 Days Program, which supports Aboriginal and Torres Strait Islander families with the first 1000 of their child's life, with a focus on connecting to culture. Starting with a smoking ceremony, the official ceremony took place inside the Gippsland Performing Arts Centre theatre, where Gunaikurnai elders officially welcomed the babies and presented families with possum skins and their family tree. 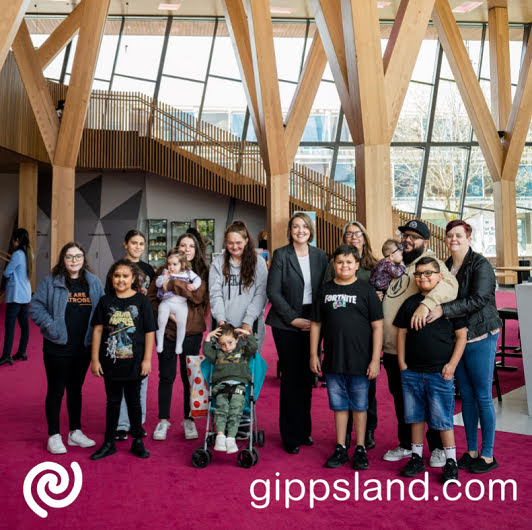 This special ceremony was originally developed by a group of local Aboriginal women, supported by Latrobe City Council and Anglicare Victoria as part of the First 1000 Days Project.

The Latrobe First 1000 Days is focused on implementing 'The Journey'. The Journey is made up of several components: the Welcome Boorai to Country Ceremony; Connecting Elders to Boorai via a series of gatherings held in the lead up to the Welcome Boorai to Country; and completing cultural activities such as burning the family story onto possum skins and completing a Boorai book and family tree.

Mayor of Latrobe City Cr Kellie O'Callaghan said the project played an important part in connecting the new Boorai to their culture. "This project aims to promote strong cultural connections for Aboriginal and Torres Strait Islander families with children in their first 1000 days. The first 1000 days are from conception to two years of age, laying the best foundation for children's future health and wellbeing."

"The ceremony was also an opportunity for the local community to be together, share stories and support each other in their journey as families," said the Mayor.