Bass Coast local Brett Tessari has been officially announced as The Nationals' candidate for Bass in the 2022 State Election.

Mr Tessari's candidacy got resounding support at the 2022 Nationals State Conference in Shepparton on Saturday, which was attended by hundreds of grassroots members, and Federal and State Nationals MPs. Mr Tessari's a third generation local who's been actively involved in the local community his whole life, including with the Wonthaggi Power FNC, serving on Bass Coast Council and with the local Rotary and iconic Relay for Life event. 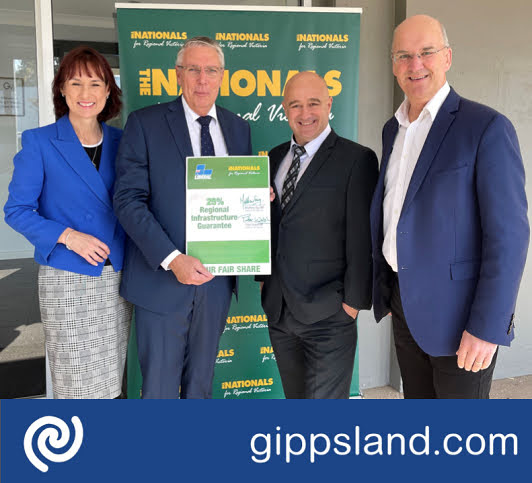 He said the current government's city-centric agenda constantly disadvantages our region, which was why he had decided to run for The Nationals' team. "Like all local people I've been frustrated to see our key local issues, like mitigating erosion, roads, public transport, constantly under-funded by the state government."

"The Bass Coast has so much potential to thrive with a strong local representative in Victorian Parliament. I believe the best way to do that is as part of a team of Nationals MPs who are dedicated to securing a fair share for all regional Victorians."

"On my priority list for the Bass electorate are delivering certainty that our communities will never again be put into lockdown and securing more investment in maintaining local roads with a return of the Country Roads and Bridges Program." Mr Tessari said.

Positive change in the local region

"Brett has long championed positive change in the local region, through his work on council and in the community - I'm thrilled to have him running for Bass as part of The Nationals' team," Ms Bath said.

Victoria needs to be heard

"Regional Victoria needs our voice heard in the halls of state parliament, but we don't even rate a mention by the city-centric Andrews Labor government. I look forward to working with Brett, Shaun and Melina as we continue to fight for a dedicated fair share for regional Victoria." Mr Pankhurst said.