Call for government funding to utilise the sports entertainment centre and give good potential to help make Gippsland to become the football heartland.

Member for Morwell Russell Northe is calling upon the State and Federal Governments to provide funds to turn the Latrobe City Sports & Entertainment Centre (LCSEC) into a football centre of excellence. 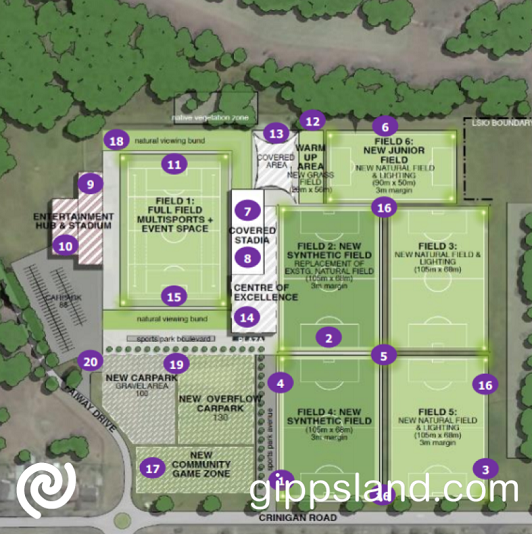 Whilst some aspects within the master plan have been completed, there is still a vast amount of works required to bring the stadium up to a modern standard which is a source of frustration for the football community. Mr Northe said approximately $13 million would be required to transform the stadium into a football centre of excellence and realise the potential of this
centre.

Utilised for variety of purposes

Mr Northe said, "The current stadium has been utilised over many years for a variety of purposes and attracted some significant events including "A-League" games of football despite the facilities being in a relatively poor state. We have an opportunity in our own backyard to create an amazing precinct that could attract some special events including the LCSEC being a host venue for the 2023 FIFA Women's World Cup." Mr Northe said.

"A real possibility exists to showcase our area in hosting significant events which would provide a real boost to tourism and to our local economy. A new football centre of excellence would allow for the hosting of Regional, State, National and even International games and events." Mr Northe added.

"With a masterplan of the current stadium already supported by stakeholders, I urge the State and Federal Governments to urgently jump on board and provide the necessary funding to transform LCSEC into a world-class facility for future use" said Mr Northe.

Potential for the region

Representatives from Falcons 2000 Soccer Club said, "There's huge potential within the master plan and it would be huge for our region to host a national team for the women's world cup in 2023. There's real scope to base a centre of excellence at the venue and re launch the sport within Gippsland. We are a proud community with a rich & successful history in the sport."

"The stadium is in need of major rejuvenation and this is required for the future of the sport and attracting major events. It is extremely disappointing that sports like AFL have had significant capital investment in the area but our venue, a supposed Centre of Excellence, has been left by the wayside. This needs immediate attention by Latrobe City Council, State and Federal Governments."

"Latrobe City Sports and Entertainment Stadium is in a state of disrepair and to be honest some elements are unsafe for public use, in particular the major grand stand. This venue has the potential to be the best football venue in regional Victoria which would be a source of pride for all Latrobe Valley residents."

Incorporating a centre of excellence

"However, the existing facilities fall well short of a venue with that title. Completing the masterplan will allow the Gippsland Region to house a true "Home of Football incorporating a Centre of Excellence" to rival other regional areas such as Ballarat and Shepparton whose facilities are of a higher standard than ours in Gippsland."

"The completion of the plan also allows for all local football offices to be housed at the one location as well as the scope to host junior football tournaments and draw additional teams/clubs and visitors to the region."

Gippsland as a true football heartland

Kimon Taliadoros, Football Victoria CEO said, "The Latrobe City Sports and Entertainment Centre is the centrepiece of Football Victoria's strategy to grow the game in Gippsland, a true football heartland. This upgraded Masterplan represents a once-ina-generation opportunity and would again position Morwell as the undisputed football hub in Victoria's south-east."

"This facility is one of our most iconic and historic pieces of football infrastructure, symbolising decades of aspirations for football in the Latrobe Valley. With the 2023 FIFA Women's World Cup expected to spark a major surge in participation, particularly among women and girls, now is the time to start writing the next chapters in the story of this famous facility. FV looks forward to working closely with the key stakeholder groups to realise this critically important project."