The five renowned sportspeople were formally recognised for their achievements at the highest national and international levels with a formal ceremony and plaque unveiling at the Walk of Fame in Civic Park, Warragul on Tuesday 8 March, 2022. 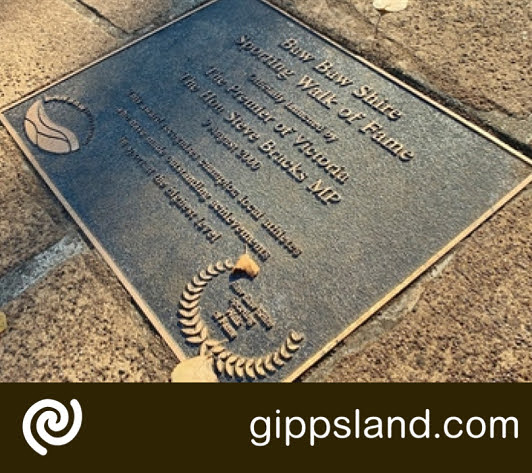 Located in Civic Park, Warragul, the Baw Baw Shire Sporting Walk of Fame was created in 1999 in recognition of our region's champion athletes

To ensure that only the most deserving athletes are inducted into the Sporting Walk of Fame, there are guidelines that have been developed to assist in the review of nominations, and these are the five champions showed great contributions through sports:

Lichelle Clarke PLY is an elite swimmer with a successful career at both a junior and senior level. Her highlight achievement is her Paralympic silver medal triumph in the 400m freestyle at the 2004 Athens Games. 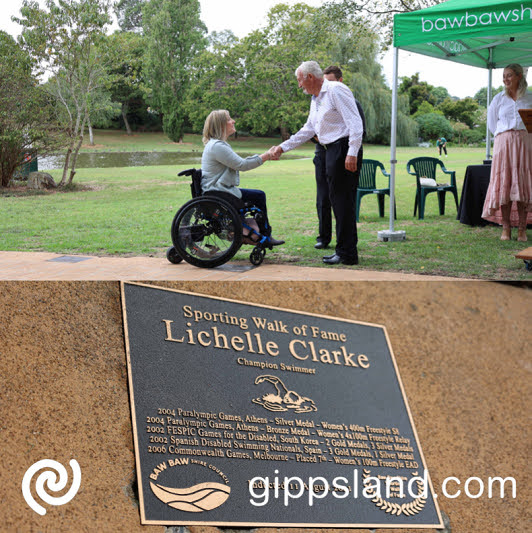 Tania McLeish is a three-time world champion underwater hockey player and a key member of the Victorian Women's team. She has also won multiple gold medals at the Australian National Titles through the 1990s and 2000s. 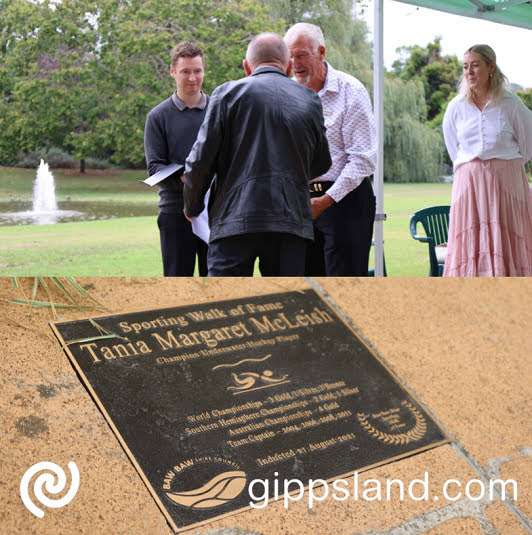 Anne Skinner is an exceptional international equestrian, having competed in two Paralympics, as well as at world, national and state championships. She has since received coaching qualifications with Riding with the Disabled Association of Victoria (RDA) and Equestrian Australia (EA). 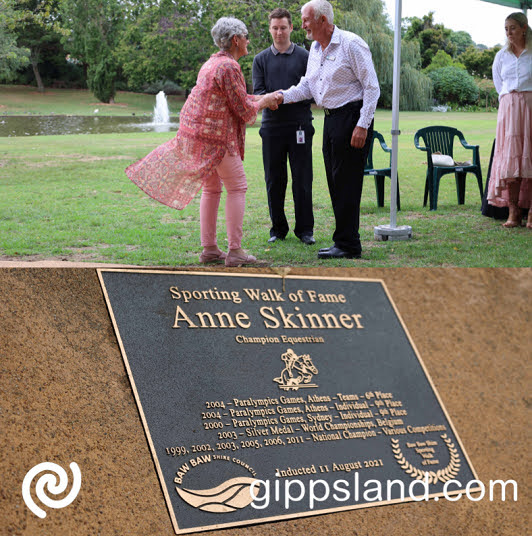 Belinda Watts-Keeley is a two-time world champion underwater hockey player, having secured gold with the Australian Women's team in 2002 and 2006. She has also represented Australia in the Elite Women's division at six other world championships, winning multiple medals. 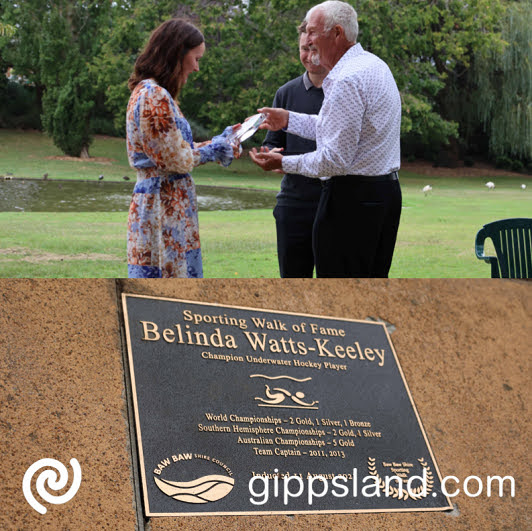 Belinda Watts-Keeley while accepting her trophy

Jason Bargwanna is an Australian V8 Supercar champion with a career spanning more than 15 years, and including 377 V8 supercar races, 7 wins, 23 podium finishes and 3 pole positions. Following this success, in 2011 Jason left the Australian V8 Supercars and joined the New Zealand V8 Touring Car Championship, where he was equally as successful. Jason was inducted to the Sporting Walk of Fame in 2020, however the planned ceremony was disrupted by COVID-19 restrictions. 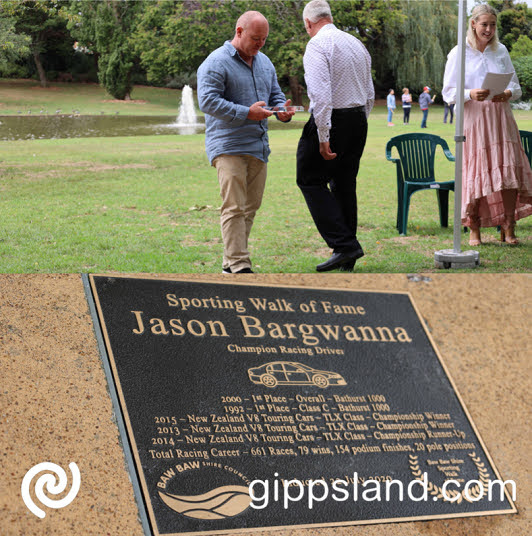 Jason Bargwanna while accepting his trophy

To qualify for the Sporting Walk of Fame, a person must have achieved great success on the elite sporting stage. They must be of good character and a role model for residents and have resided or have a strong connection to the Shire.

Lichelle, Tania, Anne, Belinda, and Jason join 19 other inductees, including Lionel Rose for boxing, Kathy Watt for Cycling and AFL player Gary Ablett.
The simultaneous induction of four female athletes is a historic first for the Walk of Fame, and signals a positive change for gender equality in Baw Baw Shire. To recognise the significance, this year's induction ceremony was held to coincide with International Women's Day.

Recognised by the community

Jason Bargwanna said, "For me this is all about a young guy who chased, fought hard and followed his dreams and passion. I started my racing career with some lofty goals and wanting to achieve some amazing things.

"With hard work and the support of many great people, I was able to realise those dreams and results. It's nice to see others enjoy and share in the journey and to be honoured in this way is very special."

"Deb, Jake, Ben, and I are proud to be part of this community. We have made Warragul our home and set up shop here. For the community to recognise my career is very humbling and very special. A huge thank you goes out to the council and those who made this possible." Mr Bargwanna said.

Lichelle Clarke PLY said, "I feel honoured for the privilege of having my sporting achievements recognised in the Baw Baw Shire Sporting Walk of Fame. This induction not only acknowledges my accomplishments but helps increase the exposure of Paralympic athletes and the achievements they can reach with the support of their local community." 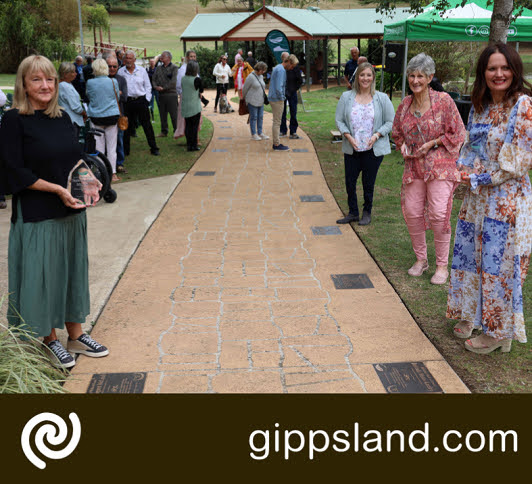 Tania McLeish said, "It is a high honour to receive this recognition and to be inducted into the Sporting Walk of Fame within the Baw Baw Shire. I would like to thank Rees for nominating me, an extremely talented player himself, and the many people who have helped my achievements along the years." Mr Bargwanna said.

Mr Bargwanna also said, "Firstly, Belle who convinced me to start playing Underwater Hockey at the Warragul pool and then to all players who helped me progress up through the ranks in the Victorian and the Australian teams. My best memories are of all the team members I have played with and the lasting friendships I have made through this sport. After hard work and dedication nothing beats winning National championships and then World Championships."

"I have always strived to be the best I can be even through difficult circumstances. At present my thoughts are with Ukraine who must show outstanding courage to remain firm and fight for their independence." Mr Bargwanna concluded.

Honour to be inducted

Anne Skinner said, "It's a thrilling honour to be recognised and to be included alongside so many amazing athletes."

Belinda Watts-Keeley said, "It is a huge honour to be inducted in the Baw Baw Shire Sporting Walk of Fame. I'd like to thank Drouin High School for offering such a diversity of sports. They helped me along this path which has seen me circle the globe playing the sport I love for the past 25 years."

Mayor Cr Michael Leaney said, "On behalf of Baw Baw Shire Council and the wider community, I congratulate Jason, Lichelle, Tania, Anne, and Belinda on their incredible sporting achievements. All are worthy ambassadors for our region."

"It is wonderful to be able to formally celebrate their contributions and cement their place in history with these plaques along the Baw Baw Shire Sporting Walk of Fame." Cr Leaney said.

Cr Jazmin Tauru said, "I am in awe of these five amazing human beings and all they have accomplished in their chosen sports. In Jason's case, this ceremony has been a long time coming. It is wonderful to finally be able to congratulate him in person and formally recognise his induction into the Walk of Fame with a proper ceremony.

In Lichelle, Tania, Anne, and Belinda, I see four incredible women that will be rightly recognised forever on the Sporting Walk of Fame. All this year's inductees have achieved at the absolute highest levels of their chosen sports, and all have my sincere admiration and congratulations." Mr Tauru said.

Cr Peter Kostos said, "It is a great pleasure to induct these five outstanding competitors into the Baw Baw Shire Sporting Walk of Fame. All are fantastic role models, and their recognition is well deserved. It is great to know that their names on these plaques will serve as an inspiration to sportspeople across the Shire for years to come."