Construction works have begun on a new shared-use trail connecting the towns of Erica and Rawson in Baw Baw Shire's far eastern region.

The $900,810 project is fully funded by the federal government's local roads and community infrastructure program and will see the construction of a new 4.7km sealed trail that starts at the intersection of Henty Street and School Road/Moe-Rawson Road in Erica and extends through to Rawson's town centre and brand new skate park and multi-play recreation space at Pinnacle Drive. 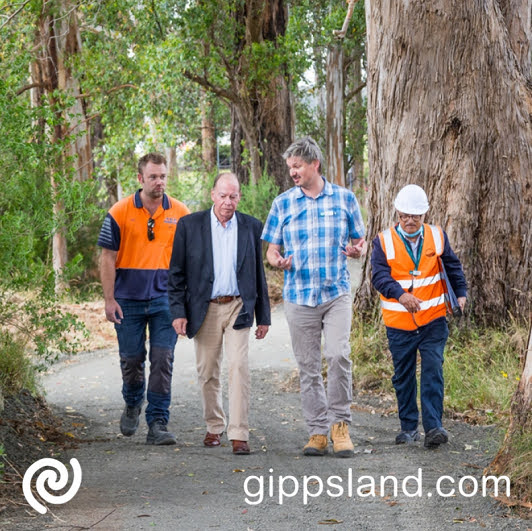 This morning, Mayor of Baw Baw Shire Cr Michael Leaney, and the Federal Member for Monash Russell Broadbent, were joined by the project manager and Ace Earthmoving representative at the site of the new path to mark the commencement of works with an official sod turning.

The Erica to Rawson Trail project has been strongly advocated for by the Erica Community Facilities Committee of Management, who have been passionate in highlighting the benefits the trail will provide for Erica and Rawson.

Rawson resident Bev Dowie has been involved in advocating for a path that connects the two towns for several years. "One of the main benefits of the new trail is it will create a safer, more accessible method of connecting the school kids who have friends living across Erica and Rawson," she said.

The project has been designed to serve the recreational needs of multiple user types, including walkers, cyclists and horse riders and its completion will deliver a valuable asset and tourist attraction to two towns whose economies rely heavily on visitation and tourism. Ace Earthmoving is the contractor working on the project which is expected to be completed by the end of May.

Mayor Cr Michael Leaney said, "I am thrilled to see construction works beginning on the Erica to Rawson Trail. Projects like this not only benefit the local residents by improving amenity and convenience, but they also provide new attractions for tourists in the area. On behalf of Baw Baw Shire Council, I'd like to thank the Federal Government for funding this project and recognising the value it will deliver to the Eastern communities of the Shire."

Federal Member for Monash Russell Broadbent said, "This type of infrastructure is the future of tourism right across Gippsland. It's the highest growth opportunity for walking and riding that is drawing people all over the state to Gippsland. This project enhances our existing tourism opportunities."