Country roads miss out again, while the regional development budget decimated the hopes of regional Victorians for significant funding contributions.

Nationals Member for Gippsland East, Tim Bull, said he is staggered there are no funds for a country roads blitz and the cuts of two years ago have not been restored. "With all the noise being made by rural communities around the poor condition of our country roads, we expected to attract big investment, but funding remains at a lower level for maintenance than it was two years ago," Mr Bull said. 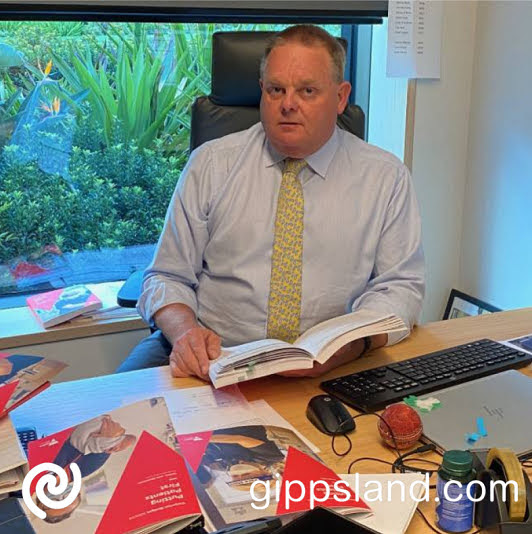 Gippsland East MP, Tim Bull at Parliament on Tuesday, is disappointed to see major cuts to the Roads, Regional Development and Agriculture budgets

Mr Bull also said, "It is simply not good enough that roads are in the condition they are in, and we have another budget handed down without a significant contribution being made to fix the problem."

"The reality is, that unless the money is allocated as a starting point, it is impossible for things to improve and they will only continue to deteriorate. A further $24 million has been lopped from the road asset management program, after $191 million - or 23 per cent - was slashed in last year's State Budget." Mr Bull said.

"There was hope we would get capital funds for the Orbost or Maffra police stations, or the required new fire stations at Metung and Lakes Entrance, but none of these attracted any attention. Not only did they miss out, there is no funding for our local health infrastructure. In Education, there is an allocation for improvements at the East Gippsland Specialist School, which as a past school council member, I am pleased to see." Mr Bull said.

"There are funds to upgrade carriage stabling at Bairnsdale train station, but unfortunately no new services, and two jetties that have fallen into disrepair at Lakes Entrance and Raymond Island will be rebuilt." Mr Bull continued.

Mr Bull added, "From a longer-term perspective, there are funds earmarked to develop the Croajingolong Coastal Walk in years ahead. This is long overdue after the Coalition funded and built the bookends of this when in government eight years ago."

"I strongly support this project and will push to bring this to fruition as soon as possible by initially seeking some time frames from the government. Hopefully, the work will be done quicker than what we have seen with the bushfire recovery works."

"The Budget papers also contain mention of refurbishments at three public aged care facilities for Orbost, Camperdown and Mansfield at some stage in the future, but there is no detail, which should become available in the coming weeks. Two intersection upgrades for Bairnsdale, announced two years ago in the local media, have also been listed," said Mr Bull.