More jobs in Latrobe Valley as Govhub opens for business

GovHub to open and create more jobs in the community and support economic growth.

The Andrews Labor Government has delivered on its jobs promise to the Latrobe Valley, with hundreds of new public sector jobs at the newly completed GovHub in Morwell. Minister for Regional Development Mary-Anne Thomas was today joined by Member for Eastern Victoria, Harriet Shing, along with Castlerock Property and members of the community to officially open the $30 million building. 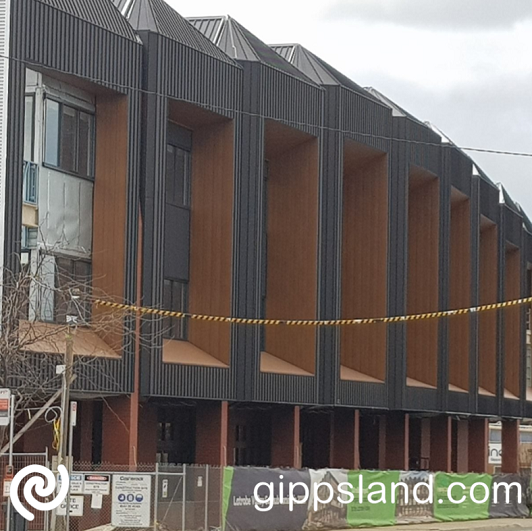 The facade of the Govhub building in Church St, Morwell

The GovHub is a key part of the Labor Government's $266 million Latrobe Valley transition package to support economic growth and create jobs and will see the decentralisation of roles to regional and rural Victoria.

The Latrobe Valley site will house 300 workers from the Victorian public service, including 200 new roles. So far, the GovHub has welcomed staff from Parks Victoria and Solar Victoria, with new tenancies and workers to take up residency over coming months.

A major feature of the new GovHub includes its energy saving design, with a 99-kilowatt solar system made up of 302 panels installed on the roof of the GovHub. These are designed to produce 110,000kWh of electricity and reduce carbon emissions by 115 tonnes each year, allowing the site to achieve a 6-star energy rating.

In addition to providing a long-term annual boost of $15 million to the local economy, the GovHub has also been an important source of local employment for the region. More than 500 construction jobs have been delivered with more than 80 percent of construction involving local trades, supplies and services.

Part of Castlerock's vision for the GovHub was to partner with traditional owners, the Gunaikurnai Land and Waters Aboriginal Corporation, and feature local Indigenous artworks. The GovHub boardroom tables have been decorated with Indigenous designs thanks to a partnership with The Torch program, which provides support to Indigenous offenders and ex-offenders in Victoria.

Since 2016, the Victorian Government has invested hundreds of millions of dollars to transform the region's economy, leading to more than 3,800 new jobs so far. The Victorian Government has invested in three GovHubs across regional Victoria, with the $100 million Ballarat GovHub opening earlier this year and works soon expected to start in Bendigo.

Minister for Regional Development Mary-Anne Thomas said, "The GovHub is a key part of our commitment to revitalise the Latrobe Valley, create local jobs and provide a diverse range of employment opportunities into the future."

Member for Eastern Victoria Harriet Shing said, "The Morwell GovHub is a significant part of our commitment to the growth and prosperity of the Valley - we are absolutely determined to continue our support for long-term transition through a range of investments that create jobs in construction, support workers from a range of sectors and enable Gippslanders to work closer to home."

Director of Castlerock Property Adam Bront said, "Collaborating with the Morwell community and the Victorian Government to bring the GovHub to life has been a great achievement for the Castlerock team and we are proud to have exceeded the targets that were set for us."