Lakes Entrance CFA brigade has outgrown its station to the stage that later this year it will not be able to fit all its vehicles inside.

Gippsland East Nationals MP, Tim Bull, met with brigade representatives recently who explained that when the new and longer rescue vehicle arrives this month, the members will literally not be able to house them all in the shed. "Former captains Geof Bassett and Bob Richardson showed me the four vehicles that are squeezed in there at present with literally a couple of feet to spare, so when the bigger vehicle arrives it will just not fit." 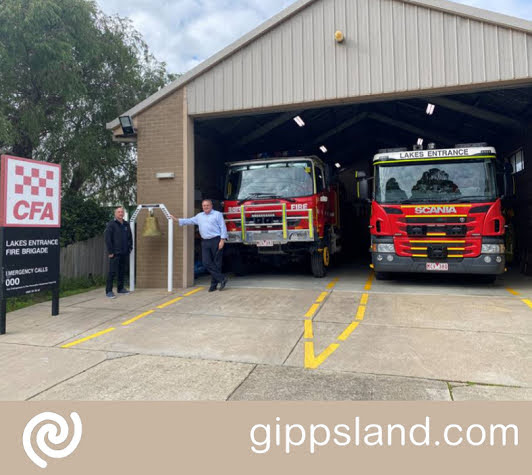 Mr Bull said, "It is just one of the reasons Lakes Entrance needs a new station, but apart from this, it is just not fit for purpose." Mr Bassett, said the brigade had been advocating for some time for a new fire station, stating the station had been at the present site for over 90 years and was now being restricted by room.

"It is also in a location where it is not perfectly cited for quick response given the increasing traffic around the area, so apart from being bigger, it needs to be better located," he said.

Mr Bull said he was aware of discussions between CFA management and the council to identify land off Palmers Road as a potential site for the new station was in continued discussions to identify a specific site and work on getting the infrastructure built.

"I have been speaking to both the CFA and the council and am keen to progress this to the stage where we can put some specific plans in place. You don't have to look back too far to know the important role these volunteers play in our community and they deserve to be provided with the right facilities," Mr Bull said.