Preliminary results from a state-wide survey show two roads in East Gippsland are in the top three worst regional roads in Victoria.

Victoria's Worst Roads campaign was rolled out so drivers could have their say about the dangerously deteriorating roads in regional Victoria, and there is still time to get your votes in for those who haven't already. "It is disappointing, but not at all surprising, that the Great Alpine Road is currently ranked as the worst road in Victoria," Mr Bull said. 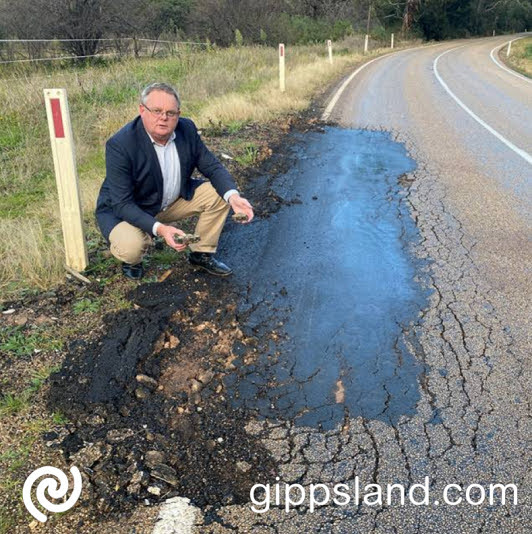 Mr Bull said' "The pitiful patchwork surface of Paynesville Road sees it currently ranked third. We know our roads in Regional Victoria are deteriorating at an unacceptable rate, and I am fed up hearing the Roads Minister, Ben Carroll, bang on in Parliament about how our roads 'are smoother and safer'."

"That is just not true, in not only East Gippsland, but much of country Victoria. That's why I'm urging locals to play a role in advocating for better, safer roads by logging onto Victoria's worst road by going to Vote for Victoria's worst road website to tell their story and vote for the worst roads in our state."

Lack of understanding on safety

Mr Bull also said, "I continue to be baffled by the Member for Eltham, Vicki Ward's, rant in Parliament recently, where she inferred the ruined and unsafe regional roads are an 'imagined fantasy'. These comments and many more made by the Labor government demonstrate the lack of understanding about the poor state of our country's roads."

"If they drive outside the tram tracks, Labor MPs won't find it challenging to find a poor performing or crumbling road surface. I've even offered to drive them around myself. It is important to send a message to the Andrews' Labor government that the road maintenance budget needs a funding increase, not a reduction and the design standards must be engineered to withstand typical traffic rigours and not blow out two weeks after repair. We deserve better," Mr Bull concluded..