Lack of comprehension and no appetite from the government to reopen Buchan, also, lack of interest in reopening it has disappointed many in the community.

On December 12, 2020, Environment Minister Lily D'Ambrosio - a week over 12 months ago - said technical specialists had been engaged to prepare a plan to ensure the popular Buchan pool was compliant and safe for use. 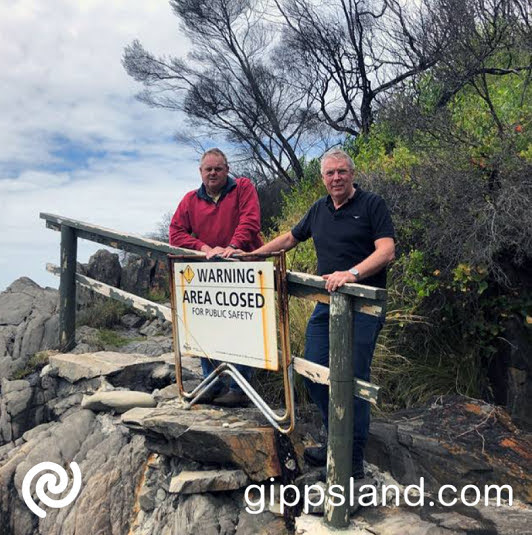 Gippsland East Nationals MP, Tim Bull and Nationals leader, Peter Walsh at Cape Conran boardwalk. The Government committed to having it finished last Christmas, then months ago for this Christmas, but has failed again with work not even started

Planned opening date and an explanation

Mr Bull said, "This was in response to a question in Parliament from Gippsland East Nationals MP, Tim Bull, who said 12 months on, nothing has advanced. "In fact, I asked the Minister a further question last month on obtaining a progress report. She had one month to reply under parliamentary regulations, but that date passed on Saturday, and I likely won't hear until well into next year."

"My question enquired as to a planned opening date and an explanation of what the hold-up has been. It has been three years since it was closed. I have explained to the Minister it is an important tourist facility in Buchan and added to the attraction of the area."

Similarly, in September last year the Environment Minister said that the East Cape Boardwalk at Cape Conran was expected to be delivered by Christmas 2020, 'subject to processes proceeding as expected.' "A few months ago, I was promised it would be finished by Christmas 2021. I was there last weekend with Nationals leader Peter Walsh and work has not even started.

"It is disgraceful that the Minister tells you it will be done by Christmas 2020 and it hasn't been started 12 months later. This is the Minister and city centric Government that said they would walk with us in our fire recovery, but they do not follow up and the words are nothing but tokenistic." Mr Bull said.