Nationals Gippsland East MP, Tim Bull, made the two announcements totalling $3.6 million, over the weekend, saying he had been lobbied hard by the members of both brigades. "For Lakes Entrance, the almost 100-year-old station is bursting at its seams, with trucks currently packed in like sardines and volunteer response gear having to be stored in the outdoor supply shed." 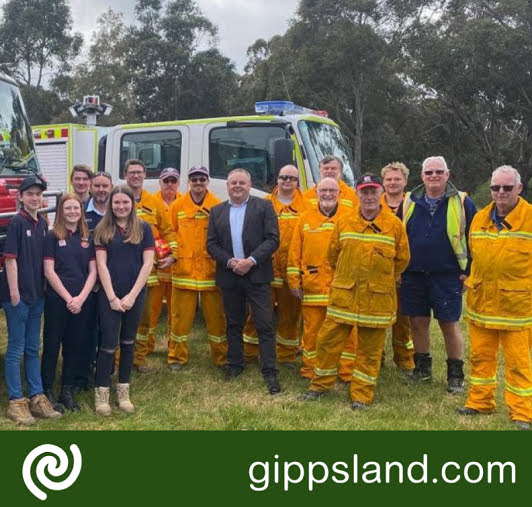 The reality is, when the new rescue vehicle arrives in Lakes later this year, they will not be able to fit it into the current facility. "While the brigade members are doing their best with the resources they have, it is clear a relocation and new station is needed and that is why I was pleased to announce $2.8 million in funding at their annual dinner on Saturday night."

Mr Bull said the new station would be located on Palmers Road where the East Gippsland Shire has agreed to accommodate the facility. "The announcement at Metung on Sunday morning was the culmination of a great community effort from a very proactive brigade."

"After raising over $180,000 to purchase the greenfield site on the corner of Metung and Hardy's Road, it's time the community received what it's been asking for and what is badly needed, a new state-of-the-art and fit for purpose fire station." Mr Bull said.

Mr Bull also said, "Metung has grown significantly in recent years and the location of the new station will be in the growth area and will provide quicker access to more households."

"The community did the heavy lifting to raise the money for the block and now I'm pleased to say that if elected in November we will provide the $1.8 million to build the new station. We value the CFA and its members, unlike the current government that wants to dismantle it."

"In country towns like Lakes and Metung, local brigades are the backbone of the community, not just when we are under threat from fire, but supporting various activities. It is also not lost on me that both these locations are big tourist towns where the population booms over the warmer months, so having strong brigades with state-of-the-art bases to work from is important," he said.