Opposition Leader Matthew Guy and Leader of The Nationals Peter Walsh have announced today that a Liberals and Nationals government elected in November will implement the nation's first Regional Infrastructure Guarantee.

Regional Victorians have been denied their fair share of state government funding for too long. Our regional hospitals, schools, sports grounds, roads and rail infrastructure have been short-changed with decades of careless neglect by successive, city-centric Labor governments. Mr Guy said it will see a massive 25 percent of all new government capital investment guaranteed for infrastructure projects in regional Victoria, in our first term of government. 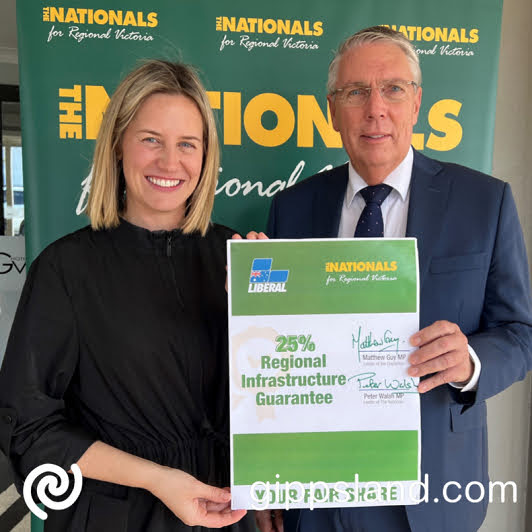 Mr Walsh said the guarantee was in stark contrast to the Andrews Labor government, which had allocated a paltry 13 percent of capital spending to regional Victoria

Victoria missing out too long

Mr Guy said, "Regional Victorians have missed out for too long under city-centric Labor governments. Only a Liberals and Nationals government elected in November will treat our regional communities with respect by guaranteeing a fair share of 25 percent of new infrastructure investment."

"New projects like the $750 million Mildura Base Public Hospital or a restored Country Roads and Bridges Program is exactly the transformational infrastructure our regional communities need." Mr Guy said.

Mr Walsh said, "It's time for our fair share in regional Victoria. Our guarantee to direct 25 percent of the government's new infrastructure spend into regional Victoria will deliver new and upgraded hospitals, schools and sports grounds, and the modern road and the rail that we deserve."

Analysis of the 2021-22 state budget papers shows just 11.4 percent of Labor's asset investment was directly allocated to projects in regional Victoria, this amounted to a paltry 13 percent in 2022- 23.

While cost blow outs on Labor's mismanaged major projects reaches $28.1 billion, the government has cut the regional development budget by 68 percent - a total of $370.3 million - in the past two years alone.