Despite promising otherwise, it has been revealed the Andrews Labor government will deliver less roofed accommodation at Cape Conran than existed pre-fire.

Originally there were five 'wilderness retreats' and eight cabins (including the larger lodge) - a total of 13. Post fires there will be 10 - a net loss of three. This is despite the Minister saying in her media release of October 2021: "the 10 brand new cabins at the Banksia Bluff will replace and add to the cabins and wilderness retreats destroyed by the fires" and that the works will "attract more visitors than ever". 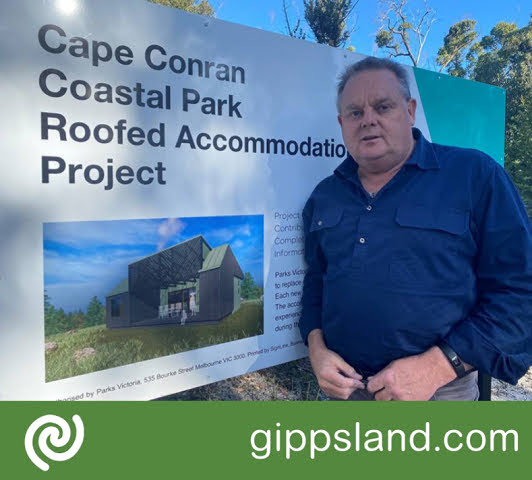 Gippsland East Nationals MP, Tim Bull, wants the Minister to explain in detail the about face and how she intends to attract more visitors with less places to stay. "What we were initially told and what is going to happen are two completely different things," Mr Bull said.

"When the fires hit, all five wilderness retreats were destroyed, as were three of the eight cabins. The commentary after the fires was that the three destroyed cabins would be replaced by insurance money, the five that survived (including the lodge) would remain and the $3.5m investment would deliver 10 new cabins - meaning 18 in total and an increase of five on what was there pre-fire."

Mr Bull said, "However, we are now told the 10 new cabins include the replacement of the three burnt cabins. Even worse, the four cabins that survived the fire will be bulldozed, as they are deemed to no longer meet safety or bushfire standards. Of those not burnt, only the lodge will remain."

Mr Bull also said, "There are two annoying elements. The first is if there had been no fire, they would not be bulldozing any cabins and secondly, if they can bring the larger lodge up to present standards, they should be able to do the same with the others that survived,"