The public space in Cowes locally known as Olive Justice Place has now been officially named in Olive's honour.

Olive Justice and her family built their home at 70 Chapel Street in Cowes in the 1950s. She was a guest house operator, tourist guide and ran the Newhaven Post Office. She was a local identity, and perhaps the first woman on Phillip Island to obtain a drivers' licence. Olive died in March 1995, aged 99 years and 4 months. As an active member of the community and someone who cared deeply for community wellbeing. 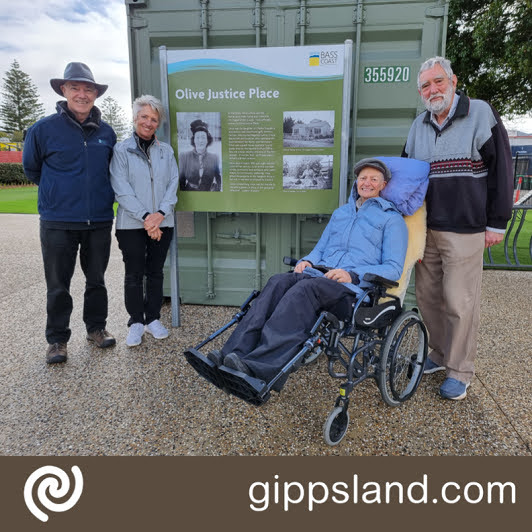 Providing a safe and quiet place

Olive gifted her Chapel Street property to the Salvation Army in her will. It was later purchased by the council. Olive's overarching vision for the site to become a garden - a place of rest and quiet reflection - a place of peace.

Bass Coast Mayor, Cr Michael Whelan said it was fantastic to see Olive's vision for the space come to fruition. "In recent months, council has completed work at Olive Justice to create a permanent outdoor dining and relaxation space, with thanks to funding from the Victorian government's Outdoor Eating and Entertainment Program."

"It has been designed to provide a safe and quiet place of reflection for visitors, featuring colourful landscaping, seating areas and shelter. The long-term site design and use of Olive Justice Place is currently being investigated as part of the Cowes Streetscape Masterplan." Cr Whelan said.

As part of the recent upgrades, a new sign has been erected in the space, to acknowledge Olive and her generosity, her connection to the site and contribution to the community.

"We would like to thank Olive's great niece, Christine Grayden, for her invaluable input and assistance providing information and photos for this project, as well as Pam Rothfield for her support as a member of the Phillip Island Historical Society and for her advocacy whilst on Council," Cr Whelan concluded.

The sign also aligns with Women for Gippsland's #puthernameonit campaign. This campaign aims to address the gender place name gap and the underrepresentation of women in the naming of public places. In Bass Coast localities, roads and features are twice as likely to be named in honour of men than women.