Work to construct an all-abilities boardwalk and shared pathway around the shores of Cunninghame Arm in Lakes Entrance will start this year thanks to $5.8 million in federal government funding.

Member for Gippsland Darren Chester has secured additional funding for the community-driven project which will be delivered by East Gippsland Shire Council (EGSC) and Gunaikurnai Land and Waters Aboriginal Corporation (GLAWAC). Named 'Krauatungalung Walk', the walking circuit will celebrate the region's rich indigenous heritage and link Eastern Beach to Main Beach with a boardwalk along the lake foreshore. 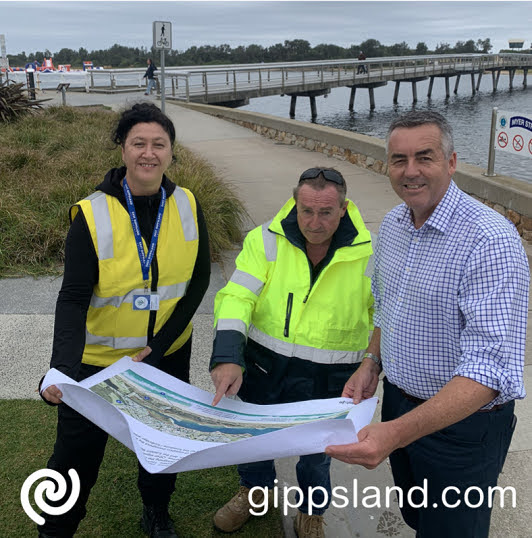 Mr Chester said, "Last year we secured a grant of $2.2 million for the first stages which council has been working on in partnership with the community and we expect construction to start in the second half of the year."

"This additional $3.6 million will allow the boardwalks to be built that are the missing links in the circuit. There's still a lot of work to be done to finalise the design in consultation with GLAWAC, indigenous elders and the wider community but I'm confident we can develop an outstanding circuit which will be popular with locals and visitors." Mr Chester said.

Mr Chester said EGSC had undertaken a cost-benefit analysis of the project which demonstrated a positive business case with jobs during construction and ongoing opportunities in the visitor economy.

"The circuit will feature public art installations which tell the story of the local indigenous community and further enhance Lakes Entrance's resilience and sustainability as a tourism and lifestyle destination," he said.

"This walk will attract visitors throughout the year and encourage the touring public to stop, learn more about the region's indigenous heritage, extend the length of stay, and visit nearby businesses. The improvements to existing infrastructure also complements the redevelopment of the Lakes Entrance foreshore which has been jointly funded by all levels of government over the past five years." Mr Chester added.

Mr Chester thanked Lakes Entrance Action and Development Association for supporting the project for several years. "As the peak organisation representing the business and general community of Lakes Entrance, LEADA's role is to advocate for funding to enhance the liveability of the town and support sustainable, long term economic opportunities."

"LEADA volunteers have co-ordinated the Krauatungalung Walk concept plans, community consultation and preliminary design work, with the assistance of a $50,000 federal government grant. The development of Krauatungalung Walk will also improve pedestrian safety and provide a safe, off-road exercise opportunity for people of all ages." Mr Chester said.