Two years and nine months after the 2019/20 fires destroyed the Thurra River Bridge, the Andrews Labor government has not even put out tenders for its replacement.

Gippsland East Nationals MP, Tim Bull, said this was disgraceful, after Premier Andrews said he would do everything possible to expedite recovery works. "What this city-centric government doesn't seem to understand is the importance of having this region open for the local economies of towns like Orbost and Cann River." 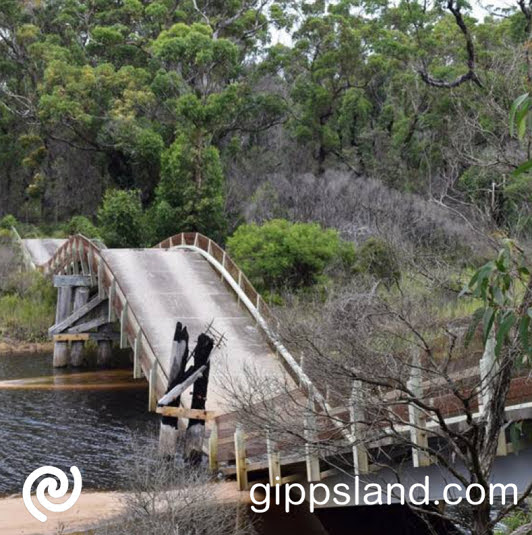 The bushfire damaged remains of the Thura River bridge, with works still not put out to tender for its replacement

Mr Bull said, "There are just 50 campsites at Thurra River and every holiday period they do their shopping and buy gear in these two towns. Point Hicks is also a popular tourist destination, yet here we are almost three years on with no plans finalised and no tenders out."

"I was advised this week that fuel, essential supplies and maintenance items are being delivered to the lighthouse by helicopter and the helicopter comes from Mansfield - what is that costing the Victorian taxpayer while the government fiddles around."

"However, this issue also causes other problems. As a result of machinery not being able to get to the Point Hicks Road, we have it eroding with the sea undercutting the road in some areas. If the bridge was fixed, it could be dealt with in a cost-effective manner, but it is now likely to continue to worsen and result in a multi-million repair bill." said Mr Bull.

Mr Bull said it was little wonder seven weeks out from polling opening in the state election Labor had not announced a candidate, as was the case in many other rural areas.

"On one hand it is just another case of Daniel Andrews ignoring the regions, but on the other hand, who would want to stick their hand up to represent a party that has dragged its feet on fire recovery works and wants to close down our timber industry," he said.