People might have already seen Sale's answer to Costa Georgiadis whipping about the gardens on his customised buggy through rain, hail or shine, but what is most impressive about Tony King (other than his beard) is the wealth of knowledge he brings to the role. With a rare background in both land conservation and horticulture, Mr King's expertise is an enormous asset to the gardens. 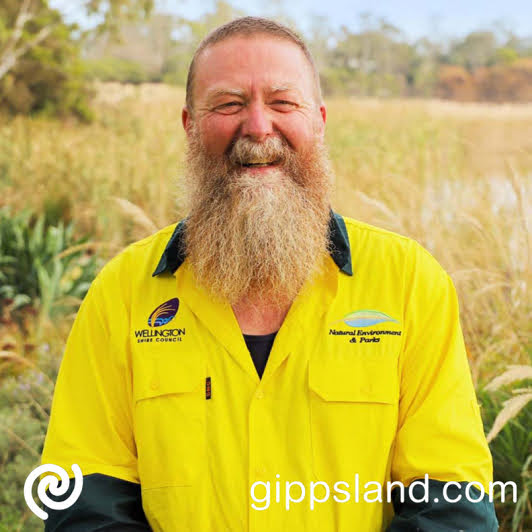 Spending the first 30 years of his life in the semi-arid, regional town of Whyalla, South Australia, some people may think it's an odd choice for Mr King to choose a career in the lush field of horticulture.

"One of the main reasons why I got into horticulture way back in the day was because one resident grew Santa Ana Couch - which was pretty rare, it was usually Kikuyu or Buffalo."

"I was maybe just starting high school, and I'd get to it and take my shoes off, because it was just such a different feel to the Buffalo - it just switched me across to horticulture." Mr King said.

Mr King and his family then moved to the Adelaide Hills for the next 20 years to run a production nursery. During his time there, he really immersed himself in his studies - gaining a Cert III in Amenity Horticulture and Cert IV in Production Horticulture, before moving onto a Bachelor of Environmental Science.

This allowed him to begin his extensive 20-year career as an educator, delivering training in horticulture, conservation land management and arboriculture across Certificate and Diploma levels.

Mr King trained up landscapers under a civil education company in Adelaide for seven years, then worked with apprentices for another five. Craving a break from horticulture, he travelled to the Northern Territory to take a job with Charles Darwin University in conservation land management.

Here, he was privileged to spend three years experiencing the top end - visiting Indigenous Protected Areas and communities - before deciding to return south. This time, to Victoria.

Initially taking up a job as a Training and Development Coordinator with Shepparton Country Fire Authority, Mr King and his wife found themselves in Wellington Shire after he transferred to Sale CFA. "I realised I was missing horticulture, because Sale is a really pretty place - that's the first thing that really struck us when we moved here," he said.

He began with TAFE Gippsland, working at Sale, Morwell and Forestec. "We used to walk down here [to the Sale Botanic Gardens] quite a bit on Saturday mornings, and working from home allowed me to visit most mornings before I started at 9am, so I was walking around here all the time. I spoke to the previous horticulturist Paul May a couple of times, and just thought to myself, this is a gig. This would be fantastic." Mr King said.

Hearing about the opportunity

And then, a door opened - the curator job was advertised. While Mr King's extensive background hasn't included working with peacocks before, Wellington Shire Council was keen to see what insight he could bring to the role.

"I'm excited - we've got some really exciting projects underway at the moment. I want it to be a tranquil space where people can come and spend 5 minutes, spend an hour, spend a day." Mr King continued.

With a background firmly rooted in education, Mr King has plans to further learning and scientific opportunities in the gardens, and was recently delighted to take through a group of Yarram Secondary School students for a career day.

Being with enthusiastic group

He also recently met the Friends of the Sale Botanic Gardens amid sideways rain and icy winds, but was amazed to see how enthusiastic the group was - even in glacial conditions. "They've all got a great feel for the garden - I'm really happy to have them on board," he said.

While he doesn't have a favourite part of the garden just yet, the Ulmus Collection is certainly growing on him - and not just because of his likeness to the collection's Jolly Swagman sculpture by John Brady.

Mr King said, "I've got a bit of a thing for trees, and there's a great collection of trees here. The Elms, when they're properly in leaf, will be extra special. If you get a bit of time there to just sit, it's quite a nice spot."

"The Bill Cane Collection is also going to be really specky when that gets up. I also really like the playground because there's always so many people there loving it, and the Summer Walk [along the edge of Lake Guthridge] is also pretty special."

"I think the whole crew are all on the same page - we really want to lift the profile of Sale Botanic Gardens. I can see the potential here. I want to make it the reason why people come to Sale." Mr King concluded.