Tonight, as the Victorian government looks set to pass its controversial pandemic bill, I feel compelled to acknowledge the Australians who, unlike me, have been forced to choose between getting vaccinated or losing their job. 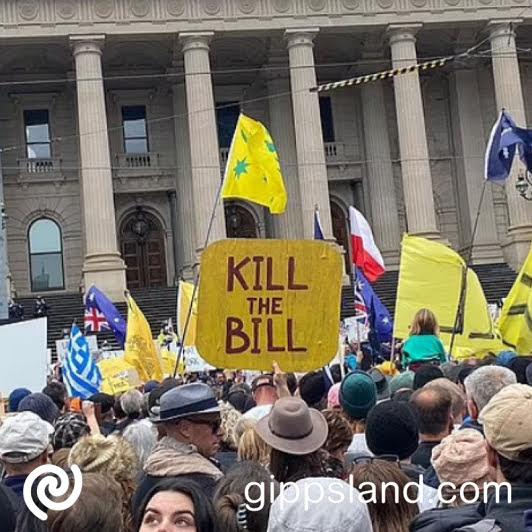 It makes no sense to me that Commonwealth officials who work in windowless offices are not mandated to be vaccinated, while vaccinations for farmers, producers and their workers in my electorate have been mandated. That's not right, it's not fair and it's not logical. For the record, I want to acknowledge that I know I'm privileged not to be faced with having to make such a decision.

Over the past nine months, I've spoken with hundreds of people in distress, many who are suffering on a scale that I find difficult to comprehend. I'm sure that my fellow members and senators are also hearing gut-wrenching stories.

I want to honour some of those people and bear witness to their suffering. I have purposely changed the names of the people that I'm about to explain to you because I don't want them to suffer significantly for the stance they've taken.

Firstly, there's Nina, a single mum in her late 30s with two children, who felt coerced to get jabbed to keep her job as an aged-care nurse. Nina came away feeling violated after her first jab. The fact that she felt coerced into getting it left her reliving trauma associated with having been raped when she was 20. She said she feels disgusted in herself that she gave in to the coercion.

Then there's Deani, a schoolteacher, and her 13-year-old daughter, who endured four weeks stranded in New South Wales, living in a stranger's caravan, whilst trying to get back into Queensland to rejoin her husband and son. David and Leah are primary school teachers and parents to three boys who are on unpaid leave while they wait to see if the mandates change.

Carolyn is a doctor who has decided to retire early so she can speak freely and advocate for patients, family and friends. Ahmad is a chef who now provides companionship and cleaning services instead of doing the work that he loves.

Fear of getting vaccinated

Bonnie, having recovered from COVID eight months ago, is fearful of being vaccinated and will lose her job as a hairdresser unless she can obtain an exemption. Tonya was told by her GP of more than 30 years that she couldn't see her face-to-face unless she was vaccinated.

Katherine and Rick, parents of two teenage girls, have decided to sell their business to set up a sustainable life on the land with friends so their daughters don't have to get vaccinated, at least until their daughters can make up their own minds and make their own decisions.

Then there's Sarah, who lives with her partner and five children aged six to eighteen. Sarah and David have been registered nurses for the past 30 years and have lost jobs which they love simply because, in their professional medical opinion, they were not prepared to be jabbed with an experimental vaccine.

More than anything, Sarah wanted to tell me about the impact this mandatory vaccination is having on her and her children. She is angry and scared and at a complete loss to understand the unnecessary and unfair adverse impacts on her children.

Her son has just completed year 12 and works as a lifeguard at two local pools but can no longer do so. He also wants to go to university next year to study either nursing or paramedics but now can't unless he gets double jabbed. He also can't pursue his love of participation in musicals or attend Venture Scouting activities.

Set to be discriminated without the vaccine

Sarah's 16-year-old daughter has all but completed her surf lifesaving certificate but can't volunteer now either. Her 10-year-old is the only child who can access the pool. However, this would be unsupervised as nobody else in the family can go. She ended with a plea for me to help save the children.

I note that Dr Nick Coatsworth, a highly regarded medical person, is completely at odds with the rest of the medical profession by saying he's strongly against the need for children to be vaccinated. I have to say so am I.