It will come as no surprise to East Gippslanders that the Great Alpine Road has been voted Victoria's most dangerous in a state-wide survey.

Land slips, crumbling surfaces and shoulders contributed to the Road clearly coming out on top. Nationals MP for Gippsland East, Tim Bull, said the fact that temporary 'traffic hazard ahead' signs have been up for nearly 12 months between Swift's Creek and Ensay, pointed to the situation. "Thousands of votes were lodged from around the state. Respondents highlighted the poor state of the road surface as well as its all-too-regular closure in recent years due to landslides. 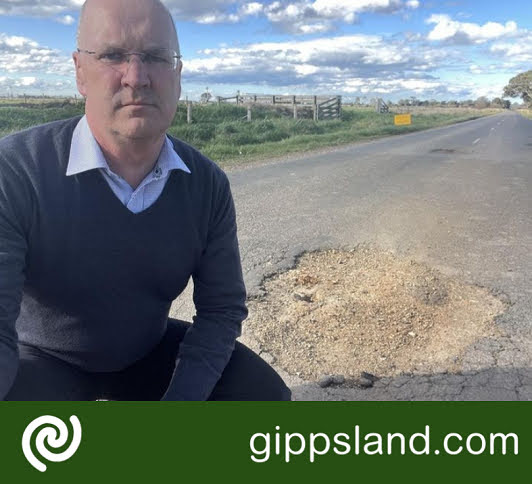 The 300 kilometre tourist trail, linking Bairnsdale to Wangaratta and slicing through the Great Dividing Range, will be announced as the state's worst road

Mr Bull said, "The Princes Highway also polled well to take second place and while the locations were not specified, I have no doubt the Stratford to Bairnsdale section accounted for a lot of the votes. Paynesville Road also made the top 10, but I acknowledge it has been pleasing to see some work has been done there in recent weeks," he said.

Shadow Minister for Roads, Danny O'Brien, said the poll results would be forwarded to Roads Minister Ben Carroll to highlight Labor's failures. "Labor cut the road maintenance budget by 10 per cent in its first year and has neglected our roads ever since."

"It was cut by a further $24 million in this year's budget after a $191 million cut last year. On top of this they have scrapped the Country Roads and Bridges funding program as well. We're seeing the result of these cuts in poor roads that are unsafe for drivers right around the state," he said.

Mr Bull said it was a joke the Minister then stood up and said the state's roads were smoother and safer, while his Labor colleague, the Member for Eltham, said our roads concerns were 'imagined fantasy'.

The top 10 worst roads in Victoria:

Gippsland East Nationals MP, Tim Bull, had been on one of the many sections of the Great Alpine Road that has fallen into disrepair.