Rapid Antigen Tests (RATs) are having a shortage while the government is trying to play the blame game.

The chronic shortage of Rapid Antigen Tests (RATs) for Coronavirus is expected to ease in the coming weeks, but Nationals Member for Gippsland East, Tim Bull, said the state government had to take responsibility for the shortage. 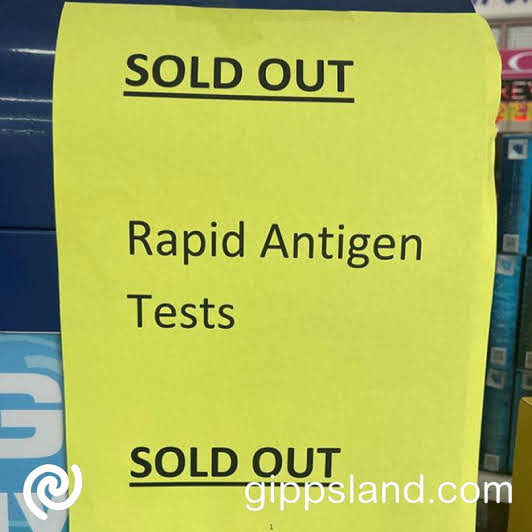 Rapid Antigen Tests have sold out at local outlets

"While our Health Minister has now backflipped and thinks RATs are the best thing since sliced bread, our local manufacturers looked elsewhere and now have offshore markets to meet that they are committed to." said Mr Bull.

Mr Bull also said, "As one manufacturer said last week, they could have poured a lot of money into the local market, but governments were clear they were not going to use RATs, or change their policies.

"So it is a bit rich for Mr Foley, who refused these tests would play any significant role point blank and held off ordering RATs until Christmas Eve, to now say he wants to use them but also wants to blame the shortage on the federal government."

"He could have had a shed full in Victoria if he had ordered them earlier. The Victorian Liberal Nationals and I have been pushing for RATs to be adopted in a range of settings to get people back to work for well over 12 months," Mr Bull said.

Mr Bull said, "Mr Foley wants to play the blame game, but he is just as guilty as anyone, his comments are on the record for all to see - he completely ruled out and refused to order the very thing he is now blaming a shortage of on the federal governmentg"

Mr Bull said he was sympathetic to businesses and workers who were able to continue to work on the back of a negative RAT result, but could not get access to the tests.

"In the past week I've heard from freight drivers and those in manufacturing businesses who need access to these tests. They are not interested in the State's blame game, they just want to know when they will be able to access the RATs. Hopefully that will be before the end of the month."