A 70-metre-long rock bag seawall will be constructed along the foreshore at Inverloch, to protect the picnic and barbecue area located at the end of Pymble Avenue.

Bass Coast Shire Council has completed the construction plans, with work expected to get underway in June. This form of coastal protection is a first for Victoria, as council continues its proactive stance on erosion on behalf of its community. The sandy shores of Anderson Inlet at Inverloch are extremely dynamic. Over time, the shoreline has experienced periods of erosion, as well as periods of sand build-up. 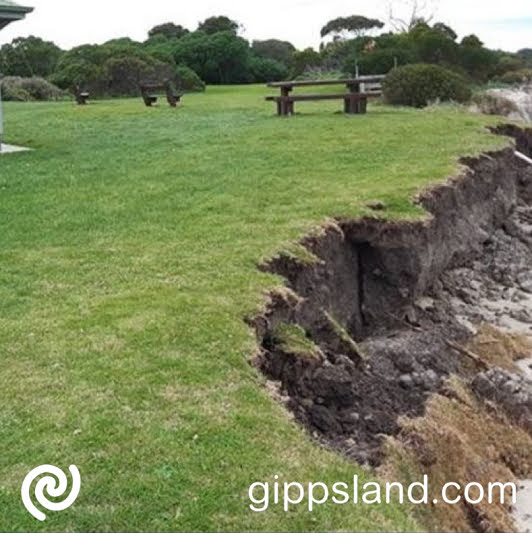 In recent years, the shoreline at the Pymble Avenue area has eroded at a rapid rate, threatening public assets, including a barbecue area, public seating and grassed open space. Bass Coast Shire Mayor Cr Michael Whelan said that the rock bag seawall has been chosen to protect the foreshore in this location, based on recommendations from the Department of Environment, Land, Water and Planning.

"By constructing a removable structure, as opposed to a fixed seawall, this will allow for the completion of the current Cape to Cape Resilience Project. This will be the first time that a rock bag seawall has been used in Victoria." Cr Whelan said.

Cr Whelan said, "This innovation has been proven to be a robust and effective solution, while offering the flexibility of removal and or relocation if needed. The information and recommendations from this Project will inform the provision of additional coastal protection structures along Inverloch's eastern foreshore and beyond."

This $230,000 seawall project is being fully funded by council's Infrastructure Renewal Program. For more information on this project, including construction plans and a timeline for the works, visit Inverloch East Seawall page or contact council by email to basscoast@basscoast.vic.gov.au or phone 1300 BCOAST (226 278) or (03) 56712 2211.