Pet census and a destructive plan to shut down the native timber industry are the biggest ticket items for agriculture in a Labor state budget that's a cruel disappointment for Victorian farmers.

Analysis of the 2022-23 State Budget papers also revealed further cuts to the agriculture budget that will gut services even more. And despite admitting Victoria faces "escalating" biosecurity risks, the government will skip out on its responsibility to protect the sector, allocating a paltry $1.8 million for 'collective biosecurity'. 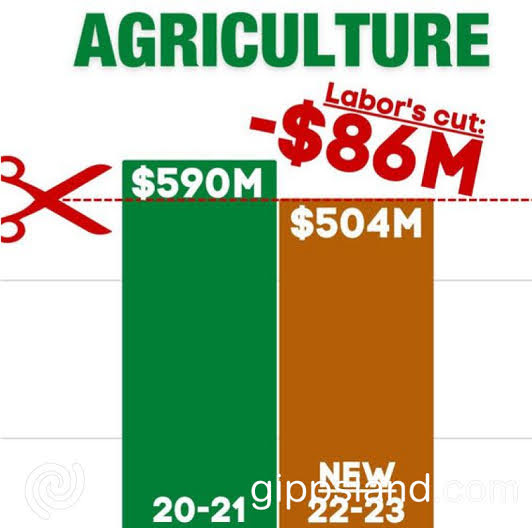 Leader of The Nationals and Shadow Minister for Agriculture Peter Walsh said the devil was in the details, with budget analysis confirming more bad news for Victorian farmers

Mr Walsh said, "An $86 million cut to agriculture spent at a time when dozens of Victorian families are exiting the industry due to difficult market conditions shows Labor is no champion for our farmers."

"We should be focussed on delivering more opportunities to get locally-grown Victorian food and fibre from paddock to plate, but Labor is silent on research and development. On top of that, there's no mention of new money for Landcare groups and nothing to revive critical freight rail upgrades to the Murray Basin Rail that have stalled under Labor's mismanagement."

On Wednesday, the Agriculture Minister evaded questions on the impact that more cuts to the agriculture budget will have on service delivery for Victorian farmers. Trade and global engagement also suffered more cuts this year, with a decrease in the budget of $46.3 million meaning even less of a focus on diversifying our farmers' access to international markets.

It comes after a destructive 12 months under Labor, with more than 100 jobs axed at Agriculture Victoria, including scientists dedicated to research and development initiatives. "Our state's reputation as the nation's agricultural powerhouse is at risk with a city-centric Labor government that's abandoned farmers and regional communities."

"Only a change in government in November will deliver a focus on building our research and development capabilities and investing in initiatives that will support Victorian agriculture to diversify by seizing on new opportunities in emerging global markets." Mr Walsh said

According to the 2022-23 Victorian state budget papers, output summary by departmental objective (BP3, p249) Analysis of the Agriculture Department spend also reveals the most funding will be spent on 'Implementation of the Victorian Forestry Plant' and 'Animal Care and Protection' (BP3, p72). The latter includes spending on "introducing Victoria's first ever pet census [and] the development of a cat management strategy to promote responsible cat ownership" (BP3, p 74).