The Nationals and Liberals in government will rebuild the Mirboo North stadium.

Leader of The Nationals, Peter Walsh, today joined The Nationals Member for Gippsland South, Danny O'Brien, to commit $2.5 million to ensure the facility is rebuilt and improved, if elected in November. Mr Walsh said The Nationals recognise the importance of the gymnasium to the local community. "This is a significant public sporting facility and it cannot be allowed to continue to deteriorate to the detriment of the community," Mr Walsh said. 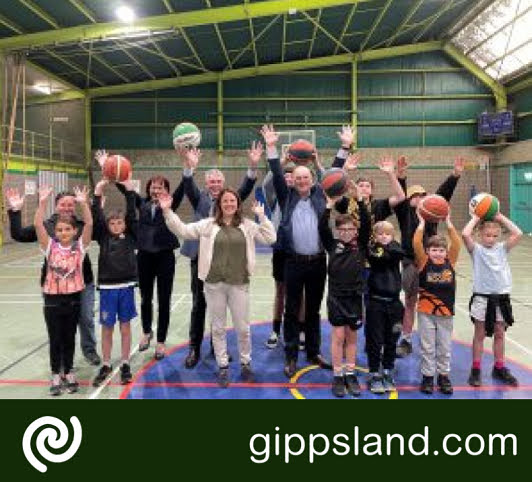 Leader of The Nationals, Peter Walsh with The Nationals Member for Gippsland South Danny O'Brien announcing a commitment to a new Mirboo North stadium and gymnasium with local community members

Mr Walsh also said, "The gym that is shared by Mirboo North Secondary College and Primary School is also a community facility used by the Basketball Association, Mirboo North Football Netball Club and a number of other sporting and community groups."

Mr O'Brien said it was clear to all that the stadium needs replacing but the Andrews Labor government has repeatedly ignored community requests for funding. "It is outdated with an undersized basketball court and concrete floors covered in vinyl. The toilets and change facilities are awful despite the schools' best efforts at cosmetic updates, and there is asbestos and various building failures that need to be addressed."

"The Nationals in government will ensure that the community is given a full regulation-sized basketball court and a gymnasium that is safe for the community and local schools to use."

Mr O'Brien said he will continue to work with the Mirboo North community to establish where the new facility should be built. "This is a slightly unusual situation in that the school facility is the only stadium in town so it is a mixed education and community use. With the money now on the table, I will work with the local schools and community groups to determine the best outcome for all involved."