The safe system approach that is designed to ensure that no crashes need to occur in the future, as we move towards zero road trauma.

It's with great pleasure that I join today's debate, and I acknowledge the member for Gilmore as representing the second most beautiful electorate in Australia - just behind Gippsland! It's great to have you here. 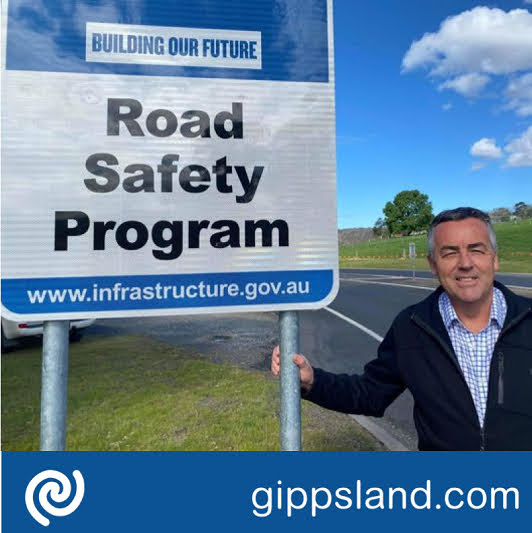 The challenge for us is to work constructively, in partnership with local and state governments, to deliver the types of roads that our rural and regional communities expect

It's no surprise to see that the speakers on this particular motion are predominantly from regional communities, because regional MPs understand better than most the critical importance of good road networks. Roads are the arterial life of our regional communities, the critical component making sure we can stay connected, whether it's for freight or to stay connected with our families.

The member who just spoke reflected briefly on the impact of the Black Summer bushfires and what they exposed as the frailty of our road network when it comes to natural disasters.

In Gippsland, the Princes Highway and several major roads linking coastal communities were badly exposed for being poorly maintained, in terms of vegetation. We spent several weeks in which communities were cut off or relying on the Australian Defence Force to deliver the most basic supplies.

We have to change our approach to maintaining the resilience of the road network to ensure that our communities can stay connected even in the face of natural disasters. What we saw post bushfires on the Princes Highway was a major tree-clearing exercise, which locals reflected on quite dryly as, 'It's about time.' They had been calling for it for decades.

I do appreciate the opportunity to speak in relation to the Road Safety Program. As the member for Riverina, who initiated this program, often reflected, too many people are killed and injured on our rural and regional roads.

Easier to blame than to accept

As the former minister and now a humble backbencher - or not so humble, as the member for Hunter is probably reflecting - I don't accept that we have to have any road trauma on our roads. We as a government have signed up to the safe system approach: safer drivers, safer vehicles and safer speeds on safer roads.

I fear, though, that governments at the state and federal levels are often guilty of focusing on the driver component of the safe system. It's far easier to blame the drivers than to accept responsibility for the lack of investment in infrastructure in the road network.

The 'use it or lose it' component is of great importance for this particular program because it forces the state governments to develop a sense of urgency about getting the job done.

What I've seen in Gippsland is tens of millions of dollars allocated in the 2019 election still being held by the Treasury, not ending up with black stuff on the roads in Gippsland. It's to the eternal shame of the Victorian state government that they haven't been able to reach an agreement to secure projects that would deliver road safety improvements in my electorate.

The contrast has been the Road Safety Program. The moment there was a 'use it or lose it' component to it, the Victorian state government suddenly found the capacity to improve road shoulders, to improve sight lines, to install roadside safety barriers, where appropriate, and to roll that program out in an expeditious way to improve road safety in the Gippsland electorate.

Perhaps it will take a 'use it or lose it' approach from the current federal transport minister to try and force this state government to get onboard and deliver the road safety improvements that we deserve in our regional communities.

Too many people are being killed and injured on roads that could be fixed. The money is available to fix them. We just need the state government to demonstrate the capacity to get on with the job.