The new Prime Minister has made a lot of claims about no Australians being left behind, a fresh approach to his role and building consensus across our community, we're about to find out if the Prime Minister is fair dinkum about those claims.

I've been seeking urgent action from the new government in relation to several projects of critical importance to the future of Gippsland. The reason I raise them here tonight is that each of these projects was fully funded by the previous government, but I fear they're in some high degree of doubt now due to partisan politics. 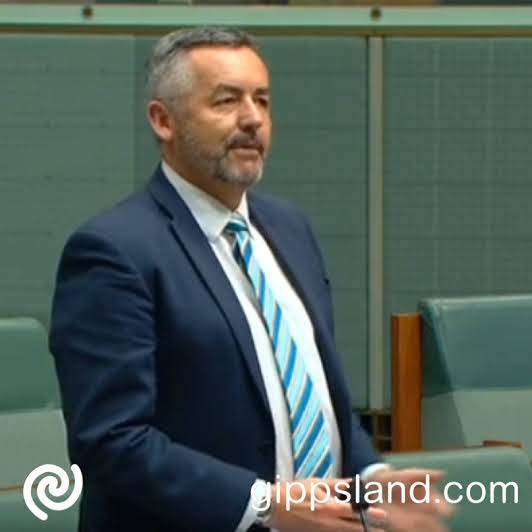 The reason I raise them here tonight is that this is not a question of a local member just trying to look after their own job - I've been re-elected for the next three years, and I thank the people of Gippsland for that great honour and privilege - these are other people's jobs at stake. These are people who live in my community, who want to see a future in their community, whose jobs are at stake.

There was a willingness by the previous government to invest in projects, in partnership with the private sector, to ensure that we have long-term, sustainable jobs in regions, like the Latrobe Valley, which are going to undergo a major transition over the next couple of decades.

I'll go through those projects one by one. The energy-from-waste project is a game changer for the Maryvale Mill. The Maryvale Mill is Australia's largest producer of paper products. It is the biggest private employer in Gippsland's Latrobe Valley region.

It is a $500 million project that will find an alternative energy source for the mill by taking household waste and gasifying it and then providing a reliable form of energy for the biggest private employer in my region and assisting them in the manufacturing process - so household waste powering large-scale manufacturing processes. This is exactly the type of long-term, sustainable initiative that this new government should be supporting - just as the previous government was prepared to do.

The other project I mentioned at Maryvale Mill was the barramundi project put forward by MainStream Aquaculture. This will be the world's largest indoor barramundi aquaculture operation. The joint venture partners involved in this project are looking at a $125 million project in total.

The previous federal government was prepared to put $30 million on the table to make sure that investment came forward and provided an opportunity to work in partnership with the activities already underway at the Maryvale Mill to provide long-term, sustainable jobs in the Latrobe Valley region.

I emphasise that it is the Latrobe Valley region, because the Latrobe Valley will be one of those regions most directly impacted under any scenario as we move towards net zero by 2050. Latrobe Valley is home to the three coal-fired power stations in Victoria that provide 60 per cent of the energy for Victoria's needs right now.

Loy Yang A, Loy Yang B and Yallourn are all forecast to close by the mid-2040s. We need to make sure that the people in those communities are treated with respect and have the opportunity to transition to long-term and sustainable jobs.

Both of those projects at the Maryvale Mill are critically important, not only for the Maryvale Mill employees who are already there but also to add new opportunities, in this case through the aquaculture initiative which the previous government was prepared to support.

The other project I mentioned was for Patties Foods. Patties Foods is the world's largest savoury pie factory, right in the seat of Gippsland, in the township of Bairnsdale. The company was a family owned business. It has expanded incredibly over the last 50 years.

They're looking to invest in improved robotics as they go about their production of the Four'N Twenty pie, along with sausage rolls and a range of other products. It is an incredibly important investment in the future of the region of the successful company. The previous government had allocated $4 million to go with the funding that was going to be provided by the private sector.

Each of these projects boosts local jobs. It helps reduce costs, particularly at a time when costs are going through the roof. It makes these businesses more sustainable. It helps Gippsland's Latrobe Valley region secure its own future and provide more opportunities for young people in those communities to have long-term, secure jobs.