Russell Broadbent as he got to know Gough William, a genuine and generous person.

I thank the member for Werriwa for her outline of a great, changing time in Australia, when the Whitlam government was elected after many years of conservative governments. But there's always more to the story. I've never put this on record and today is the day I want to put it on record. 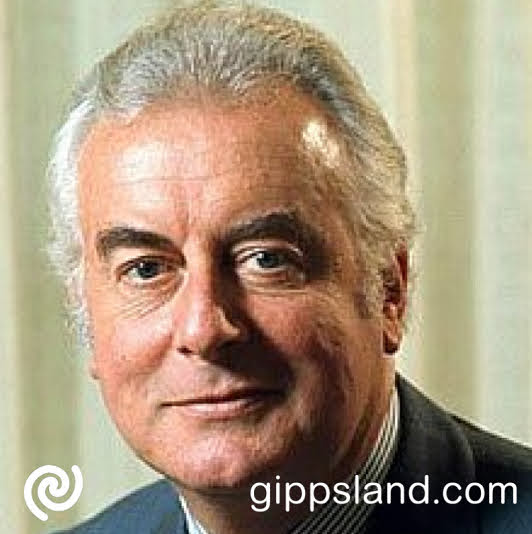 At that time, when the Whitlam government was elected, I had just opened my first retail store, which sold fabrics and knitting wool, and I was also the lead singer, manager and owner of a band called the Trutones.

Through Barry Simon, whom I was close to at the time - he lived in my district and was the member for McMillan - we were asked to do Billy McMahon's event. He said, 'Would you come along and be the entertainment for Billy McMahon at the Malvern Town Hall?' I said, 'Yes, I will.

Of course I will.' We went along and did that and we saw all the ministers. It was my first exposure to politics. I think John Howard was actually standing beside Billy moving the speech notes as he went through. This was all new for me.

Playing at the victory celebration

A few weeks later, after the election, we were the house band at the new Palais and we were there when Gough and Margaret walked into the victory celebration in Melbourne. But there was an issue - there's always more to the story. One of the fabrics in my store was a beautiful seersucker, a tartan hot-pink and lime check material - it was beautiful at the time.

I'd noticed this fabric in my shop and I said, 'Righto. I'll go to the dressmaker and I'll make an outfit for the whole band,' which I did. It was fantastic. We had the bow tie, we had the pink trousers, we had the pink shirt, we had the seersucker jacket and we had the great high-heeled boots - I think they were white or pink; I'm not sure what colour they were. No, I haven't. They go off to parties with my sons and never come home.

Genuine and generous to people

Now, we weren't the only ones. There was a woman standing there in the audience - and there were 700 people there; it was huge - and she'd made herself a dress too. And she looked at Margaret Whitlam and Margaret Whitlam looked at her, and she went straight out the back door - obviously, to go home to change her clothes because Margaret had this on. I want to say to you: Gough Whitlam was really good to me as an unknown backbencher.

He actually knew all of us. I walked into the parliament one day. There was a major function on, and Gough and Margaret were walking beside Bronwyn and me. We got ourselves in the wrong place for the official things to come through, and Gough said to me - to me, an unknown - 'Russell, come over here and stand beside me. You won't be noticed; it's all right.' And, of course, we were in the absolute spotlight at that function.

He was so genuine and generous to people around him. He knew them and he actually cared what they thought, and he took a real interest in this parliament long after his days as Prime Minister of this country. I can only honour that. Margaret was always so kind to us as well.

Opportunity of sharing the story

It's a great number of members who have left the lower house since that time. The theme was 'It's Time', and for Australia it was time. We did change, and the ramifications of that government still continue through the policies and the actions of governments of today. I thank you for the opportunity to share that story with you.