People visiting Lake Guthridge and Lake Guyatt in Sale this week might have noticed some rare critters migrating into the area, as Nakunbalook Environmental and Cultural Education Centre hosts Threatened Species Day. 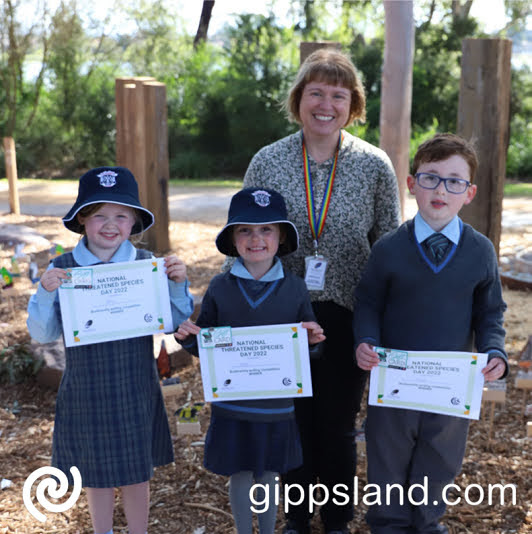 The designs were then cut out by Sale woodworker Norm Hyde and passed onto students from eight schools around Wellington Shire to paint. Finally, with the help of Stratford Men's Shed, the animals were made into more than 300 staked artworks which were exhibited outside Nakunbalook.

Wellington Shire Council Mayor Ian Bye said it was rewarding to collaborate with local schools and community groups to build appreciation of the local biodiversity.

"Protecting nature is a key theme in council's Sustainability Strategy 2020-24, and it's been great to work with the community to underscore the importance of our local biodiversity," he said.

CARE has also rolled out the project in East Gippsland, with similar artworks on display at East Gippsland Art Gallery. Held on 7 September each year, National Threatened Species Day commemorates the day the last known Tasmanian Tiger, also known as the Thylacine (Thylacinus cynocephalus), died in captivity in 1936.

The day raises awareness of plants and animals at risk of extinction. During the last 200 years, more than 100 Australian animal and plant species have become extinct. In Wellington Shire alone, there are:

Data above is according to the latest State Wide Integrated Flora and Fauna Teams data, intended to provide an overview of all known (including historic) records of fauna in the Wellington Shire which are considered threatened under the Victorian FFG Threatened List 2021.