The Federal Government is backing away from a plan which would have short-changed bushfire impacted communities in East Gippsland, according to local MP Darren Chester.

Mr Chester said he had received a letter from Emergency Management Minister Bridget McKenzie claiming the Black Summer Bushfire Recovery Grants allocation to the region would not be capped at $4.5 million, as previously indicated. It follows a letter signed by Mr Chester, Mayor Mendy Urie and State MP Tim Bull, protesting against East Gippsland's treatment under the $280 million fund. 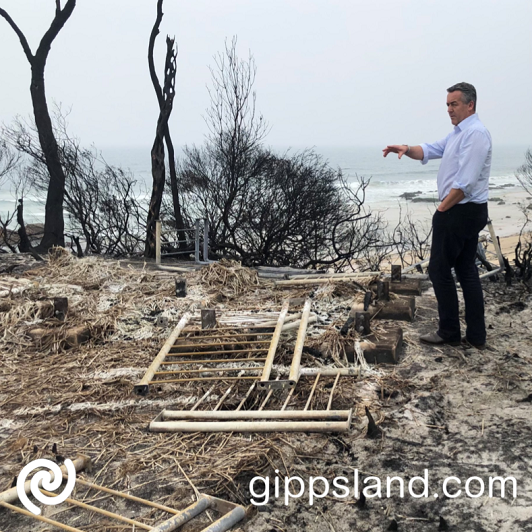 Mr Chester said, "Given the extent of damage, and the excellent projects which have been submitted for funding, we would be ripped off as a region if the East Gippsland allocation remained at $4.5 million under this program, I've repeatedly called on my colleagues to ensure the funding is properly weighted to regions which suffered direct damage, not just flow on impacts."

"It defies logic that $27 million has been notionally allocated to six Councils in north-east Victoria and just $4.5 million to East Gippsland. To add insult to injury, the Canberra bureaucrats have allocated funding based on Local Government Areas which discriminates against Victoria because we amalgamated four or five Councils into one. If East Gippsland Shire hadn't gone through the amalgamation process, under this lazy Canberra policy process, we would be eligible for $22.5 million."

But according to Minister McKenzie, the notional amount allocated in the grant guidelines is not a done deal. "These amounts are guides - they are not capped or fixed and they are not allocations," she wrote in a letter this week. The amount of funding that ends up going to projects in a LGA may be more or less than the guide amount, based on projects received, demonstrated need and the project merit." Mr Chester said.

Fight for a fair go

Mr Chester said, "I warned bureaucrats and the Minister's office three months ago that there was a huge amount of unmet demand in our region for bushfire recovery grants. It's because East Gippsland suffered the most damage in Victoria and it should receive a fairer share of the $280 million on offer."

"I have no intention of giving up the fight for a fair go for Gippsland," said Mr Chester. In the original letter to the Prime Minister, the East Gippsland community leaders highlighted the region's losses in the fires.