The Nationals Member for Gippsland South, Danny O'Brien is encouraging locals to have their say on how the continuing erosion on the Loch Sport foreshore will be handled. Mr O'Brien said after years of lobbying for immediate action to provide a solution to the escalating erosion problem on the Lake Victoria foreshore at Loch Sport, the Andrews Labor government has now opened a public survey calling for input. 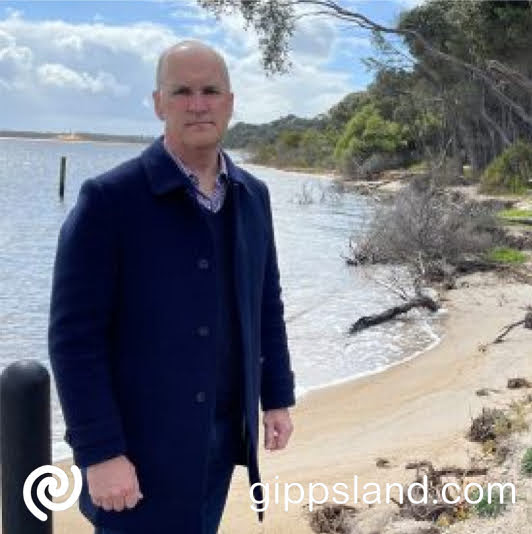 The Nationals Member for Gippsland South, Danny O'Brien, has launched a petition for funding to address foreshore erosion at Loch Sport

Mr O'Brien said, "Last week I tabled a petition in Parliament with over 350 signatures and I have another 200 or so I will be tabling in the coming weeks demonstrating the community's concern at the lack of movement on the long-discussed erosion threat."

"I want to work with the community and the government to ensure that we get a solution in place as soon as possible before further environmental damage is done."

"After five years of writing to the minister and multiple plans, studies and reviews being commissioned from the Labor government, we now have a new coastal processes study which has just been made available to the public." Mr O'Brien said.

An online public information session discussing the findings of the study will be held on Thursday 25 August at 6pm as well as a pop-up session at the Loch Sport Community Hall on Friday on 9 September from 10.00am until 12.00pm. Registrations are not required for either session.

"I am encouraging all those with an interest in how the erosion on Lake Victoria will be handled to complete this survey and attend one of these information sessions."

"It's a matter of time before there are further incursions onto public land and ultimately onto private land if action isn't taken. It is well-passed time to choose a path forward and get the ball rolling and it is important that the locals who will be most impacted by this have their say on what path is chosen." Mr O'Brien continued.

Mr O'Brien said he will be continuing to lobby the Andrews Labor government to ensure the necessary funding is allocated to address the ongoing erosion. "Ultimately, more surveys and studies aren't worth the paper they are printed on if the government isn't putting the money on the table to implement the action needed."