It's peak season at one of Latrobe City's most utilised sporting venues following the opening of a new pavilion at Traralgon's Apex Park.

The multi-use pavilion, featuring four change rooms, umpires' room, first-aid space and a drinking fountain, was opened today by Latrobe City Mayor Kellie O'Callaghan and Latrobe Valley Authority CEO Chris Buckingham. A full-scale refurbishment of the existing pavilion was also undertaken, including a new kitchen, carpets and security shutters, a fresh coat of paint and upgrades to the bathroom. 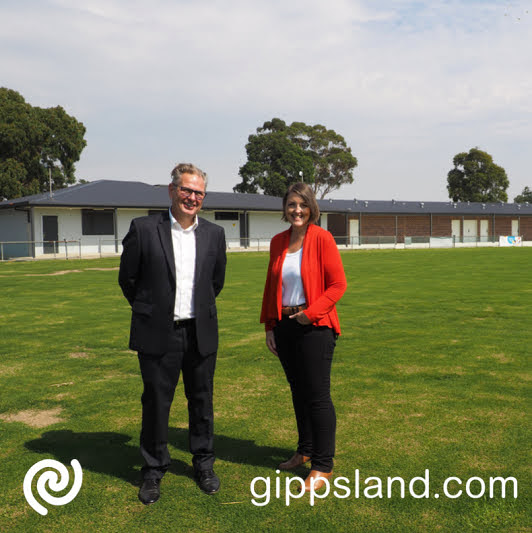 The works come as a boost for a large cast of user groups, including:

They will also improve facilities for game day preparation, attracting and hosting events and allow for canteen use at home games.

Former Pax Hill JFC President Sefton Stoddart said the new amenities were already being put to good use. "From a Police Boys JFC point of view, it is fantastic to have these great new facilities, upgrades and amenities at our disposal at Apex Park. They are a massive boost to all user groups' club profiles," he said.

"The modern, versatile change room layout means that every team, both home and visiting, are well accommodated for, with male and female amenities catering for everyone. The new umpires change rooms and medical room mean we are now a fully equipped, stand-alone facility and new stadium lighting has given us greater flexibility to play and train. All in all, Apex Park is now a topclass junior sporting venue and one we are extremely proud to be a part of."

These projects created work for local contractors including Kingbuilt, which led the design and construction of the new pavilion, while Rebuild took the lead on the refurbishment of the existing pavilion. The pavilion projects were co-funded by $872,628 from the state government and Latrobe City Council, adding to a long list of recreation infrastructure upgrades delivered in tandem.

Latrobe City Mayor Kellie O'Callaghan said, "This new pavilion is a much-needed facility for Apex Park, which is now better equipped than ever to host a long list of sporting clubs and more than a thousand players, officials and juniors who call it home."

"These facilities will increase the capacity for events and carnivals to be held at the ground and ensure our community has access to the amenities they need to flourish." Cr Callaghan said.