Federal Member for Gippsland Darren Chester has urged the government to intervene immediately and fix a "farcical situation" which has seen community-led bushfire recovery projects excluded from consideration for recovery grants.

Federal Member for Gippsland Darren Chester said he was aware of at least three East Gippsland projects that had been ruled ineligible from the Black Summer Bushfire Recovery grants program because of a technicality relating to their ABN numbers. He has written to the Minister for Emergency Management Bridget McKenzie after community-based committees in Sarsfield, Wairewa and Ensay missed out on funding because they were considered a 'state government entity'. 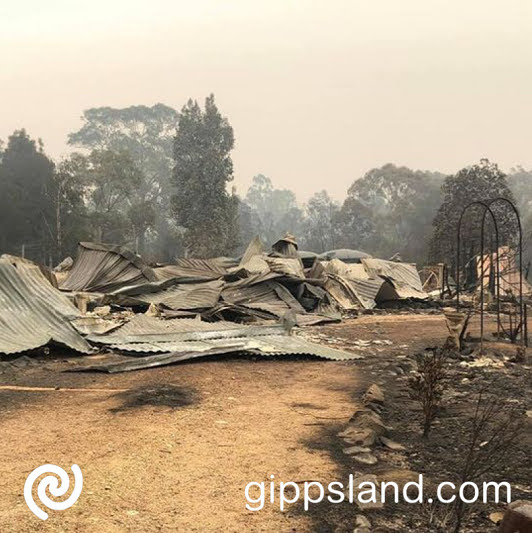 When the 2019/20 bushfires tore through Sarsfield, it left 200 properties damaged and 80 homes completely destroyed and yet their application for funding for recovery was rejected and said was ineligible

Mr Chester wrote, "To rule community not-for-profit groups ineligible to receive funding for a grant because they happen to manage a parcel of land which is owned by the state government demonstrates a complete lack of understanding of regional communities,"

"It also reeks of a lack of emotional intelligence and a blind adherence to bureaucracy at the expense of common sense to exclude projects from further consideration without bothering to check with the hard working volunteer groups, which were the project proponents."

"While there are many excellent projects on the list of successful applicants, there is enormous disappointment with the final outcome. The 'Canberra knows best' centralised model of decision-making is fundamentally flawed and disrespects my community and everything we have been through." Mr Chester said.

Mr Chester said he was not consulted at any stage during the consideration of priorities for bushfire recovery funding, and the three community groups should have their projects properly assessed for funding, and not excluded on the basis of an administrative error.

"This situation could've been avoided if the bureaucrats consulted with me at any stage regarding the application process, and the community groups could have clarified their situation,"
"To exclude these groups from receiving funding, in a region which suffered major damage during the Black Summer bushfires, demonstrates an appalling lack of judgement by the assessment team," he said.

Mr Chester also said, "At no point during the application process were the volunteers advised their project was ineligible and they harboured false hope for months as the bureaucrats delayed consideration of the grants. So much for a community-led recovery when some of the most bushfire-impacted and traumatised communities are excluded from receiving any funding on a technicality."

Sarsfield community leaders submitted a major project to upgrade the recreation reserve which is the only area of public land available for large scale community use. Volunteers manage the reserve, which is owned by the state government, as a committee of management.

Community spokesman Simon Hof said the decision to rule the application as ineligible for funding was devastating news for local residents. "There has been an enormous amount of effort and community consultation in developing a plan for the future of the recreation reserve in the aftermath of the bushfires," he said.

"Unfortunately our beloved, but old hall has reached the end of its useful life so we're seeking funds to replace it. The Sarsfield hall was cobbled together 60 years ago out of a second-hand school shelter shed and a caravan park kiosk, and we've been told that it is becoming structurally unsound." Mr Hof said.

No capacity to redevelop

In Sarsfield, out of 270 homes, 200 properties were directly impacted and 80 homes were destroyed, and local residents worked together to develop a plan which would deliver long-term benefits to the region.

"We have no capacity to raise millions of dollars to redevelop the recreation reserve without government assistance and it's incredibly frustrating that our application wasn't even assessed." Mr Hof said.

Mr Chester said the federal government was providing bushfire grants to other projects on state government land in East Gippsland. "The double standards and needless bureaucracy has left a bitter taste in the mouths of East Gippslanders who see the long list of successful projects includes applications from areas with no direct fire damage," he said.

"Again, there was no consultation with my office on the highest strategic priorities for bushfire recovery in East Gippsland. I am seeking an urgent reconsideration of the projects deemed ineligible and an assessment of the applications against the same criteria as other applicants."

"I will also be seeking other avenues of funding support from local, state and federal sources for projects that were deemed eligible, but considered incompetitive in this round." Mr Chester concluded.