The journey to create Gippsland’s Premiere Portal has certainly been a grand adventure, and we have learned much along the way. In our time we have discovered a knack for understanding our limits and exceeding them, bringing controversial topics to light, helping Gippslanders to establish themselves online, connecting hundreds of local people and getting them involved in the biggest Internet project Gippsland has ever seen. The finished product exceeded all expectations as we approached the official launch.

Celebrating the success of the Gippsland Portal formally began today with the launch and commemorative plaque unveiling by Hon. Marsha Thomson, Minister for Small Business and ICT. The presentation was attended by the supporters, contributors and members of the Gippsland Portal, in addition to notaries Brendan Jenkins and Darrell White (councillors for Latrobe City) and Professor Brian McKenzie (Pro Vice Chancellor for Monash University).

The Gippsland Portal team would like to thank everyone that has been involved with the project and encourage ongoing participation from Gippslanders everywhere. The Gippsland Portal could not have achieved such success without the aid and enthusiasm of our supporters. 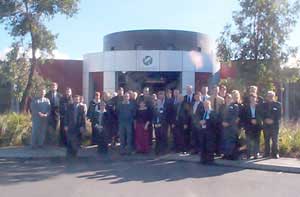